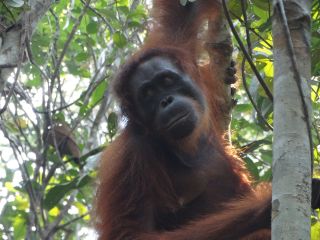 Female orangutan Kondor attacked and killed an older female with the help of her lover, Ekko.
(Image: © Anna Marzec)

A loud rumble, a scuffle and 33 long minutes of coordinated attacks by a female orangutan and her male partner led to the death of an older female orangutan in a Borneo forest, in what scientists say is the first incident of lethal aggression among orangutans ever observed by researchers.

Female orangutans are not normally aggressive. They are solitary, and rarely engage in fights, according to primatologist Anna Marzec, of the University of Zurich in Switzerland, who witnessed the event. Even more surprising is that the attacking female used a male orangutan as a "hired gun" to help corner and attack the victim, the scientist said.

Although aggression among primates is frequent, lethal attacks are rare, said Marzec. In fact, it has only been observed in a handful of species: chimpanzees, red colobus monkeys, capuchins, muriquis and spider monkeys. [Image Gallery: Lethal Aggression in Wild Chimpanzees]

"In previous observations, whenever we have seen aggression between females it hasn't even led to injuries," Marzec told Live Science. "It's normally a quick chase, sometimes some hitting or biting but those females — and we've seen only six such cases before over 12 years of studies — they never even leave their victims with wounds. That's why this particular case is so special."

Aggression among primates is a normal expression of competition for resources, Marzec said. Males compete over females and females compete for food, but these skirmishes are usually between members of the same sex. The two sexes typically only associate during the few months before a female orangutan is ready to conceive, the researchers said.

The case Marzec and her colleagues observed involved a young female orangutan named Kondor, who had recently lost her infant, and an older female named Sidony. Both orangutans lived in Indonesia's Mawas Reserve and had a history of aggressive interaction, the researchers said.

In the two weeks before the attack, Kondor was seen associating with various males, particularly one named Ekko, the researchers said. Kondor and Ekko approached Sidony together and Ekko sexually inspected Sidony before returning to mate with the younger Kondor, they added.

When Sidony started to move away, Kondor interrupted her mating and attacked Sidony. Immediately, Ekko also joined the fight, taking turns attacking the older female, the researchers reported. While one physically attacked Sidony, the other orangutan watched and blocked the victim's escape.

The fight attracted another male orangutan, Guapo, to approach and protect Sidony, eventually leading the older female away from the fight. Despite his help preventing further attacks, Sidony sustained significant injuries and died two weeks later, according to the study.

The researchers are unsure what caused Kondor's unusually aggressive behavior. Kondor could have been prompted by the presence of a male partner-in-crime who was willing to help in return for more mating time, Marzec said. But males have had such opportunities before.

"This is a really odd, one-off case," said primate behavioral ecologist John Mitani, who studies chimpanzees at the University of Michigan in Ann Arbor but was not involved with the new study. "It's an anecdote embedded in thousands and thousands of hours of observation of these animals, not only in this study, but many other studies in Borneo and Sumatra. So it's really hard to interpret what’s going on and what's responsible."

Marzec thinks this case could be an example of extreme competition for resources. Forest fires and illegal logging in neighboring areas have destroyed orangutan habitats. As a result, orangutans are living in increasingly crowded conditions, all vying for limited resources.

"These animals have been living on the edge and are highly endangered," Mitani said, noting that "we're placing them in even more vulnerable conditions. As we do, are we going to see more unusual aspects of their behavior manifest as a result?"

Details of the deadly fight were published Feb. 3 in the journal Behavioral Ecology and Sociobiology.