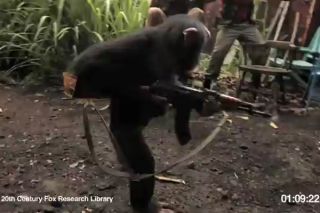 In a viral ad campaign, producers of the upcoming film "Rise of the Planet of the Apes" have released a series of videos showing weapon-wielding apes. Stylized to look like documentary footage out of Africa, one video features a chimp shooting an AK-47 at a group of off-duty soldiers who had been taunting it. Another clip shows a chimp hacking a carcass to bits with a machete.

The shocking footage is most likely intended to make the premise of the new film (intelligence-enhanced apes rising up and taking control of Earth, enslaving humans in the process) frighteningly plausible. But can chimps really wield weapons? [Watch Video of Chimp with AK-47]

According to experts: yes. Though the footage in the videos is staged, the chimps involved are merely "actors," and the underlying message — that apes could rebel and use the advanced weapons we've developed against us — is extremely unlikely, chimps are indeed capable of being trained to use a diverse armory of weapons.

But would the apes know what to do with an AK-47, or use one to cause intentional harm? Probably not. [Read: What Distinguishes Humans from Other Animals?]

"I wouldn't doubt that you could train a chimp to wield a gun in the manner shown," said John Mitani, a primatologist at the University of Michigan who specializes in chimp aggression.

Likewise, Steve Ross, a chimpanzee primatologist at Lincoln Park Zoo in Chicago, agreed that chimps are cognitively and physically capable of operating weapons, and said they even use them in the wild. "Chimpanzees have been seen to use rudimentary weapons (such as projectiles, clubs and spears), so they have the capability of understanding that a tool can be used to cause harm or do damage," Ross told Life's Little Mysteries, a sister site to LiveScience. "Whether or not they would understand a gun is more difficult to say."

Any chimp gunplay would most likely be restricted to mimicry. Mitani believes actor chimps would likely learn to operate machine guns to please their trainers and receive rewards, but he doesn't think the apes are capable of using them to purposely do harm. "When shooting the gun, I'd be hard-pressed to think that the chimp can really understand [the consequences of] what he's doing."

That said, chimps are indeed aggressive animals, the experts explained — both toward humans and each other. But they typically stick with primitive tools of aggression. They have been observed to throw rocks at humans, but their primary weapons are their hands, feet and teeth. If push comes to shove, those are what an angry chimp is most likely to use against a human. [Animal Welfare: Could the Taliban Train Monkeys to Shoot?]

"Inappropriate and inaccurate portrayals of chimpanzees have a number of harmful consequences, including … animal welfare concerns that arise from their treatment both on and off the set," Ross wrote in an email. The plot of the Planet of the Apes films might also lead people to believe apes aren't endangered, he said.

Mitani echoed that concern. "Well before humans showed up on Earth, the planet was literally filled with apes. Itwas the planet of the apes, 20 [million] to 50 million years ago before humans came on the scene," he said. "Since then, that ape diversity has been lost to the point that we only have five different kinds." [Read: What If Neanderthals Had Not Gone Extinct?]

Not only has ape diversity been lost, but there probably aren't enough apes left to overrun humans anyway.

"There's a story going on here, but it's one in which humans have taken over the planet and have driven apes nearly to the point of extinction," Mitani continued. "That's the story that needs to be told, rather than this fictitious one about how they're taking over the planet."

Mitani has worked on quite a different film about chimps, called "Chimpanzee" (to be released by Disney in 2012) that follows a young chimp as it explores its natural environment  — "a motion picture that will, with luck, show chimpanzees as they truly are," he said.