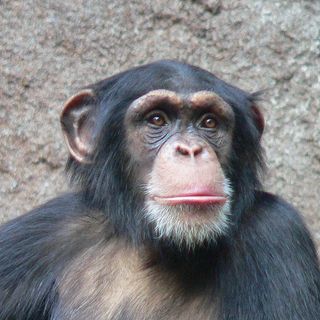 Specific features of an image of a chimpanzee can promote misconceptions about the species, a study found.
(Image: © By Thomas Lersch [GFDL (www.gnu.org/copyleft/fdl.html) or CC-BY-SA-3.0 (www.creativecommons.org/licenses/by-sa/3.0/)], via Wikimedia Commons)

Chimpanzees have an image problem. The portrayal of these great apes in commercials, movies and greeting cards may lead people to perceive them as appealing potential pets and overlook their endangered status, a new study indicates.

A survey of 1,203 people showed that specific features of an image — in particular, the presence of a human beside a chimpanzee — exacerbated these misconceptions.

Researchers based at Chicago's Lincoln Park Zoo created a series of images showing an adolescent chimpanzee clothed and unclothed, in the presence of a human and alone, and in a variety of settings, including an office and in the wild. After showing participants the images, surveyors asked them questions to determine how they perceived the population status of chimpanzees in the wild and as potential pets.

They found that the clothing worn by the chimpanzee had no effect on perceptions. Although the background had some effect, the strongest difference came with the presence of a human. [What Separates You From Chimps]

People who saw the chimpanzee standing next to a human were 35.5 percent less likely to perceive their wild populations as endangered and 30.3 percent more likely to find the apes appealing as a pet compared with those who viewed the chimpanzees without a person.

Although they may appear endearing, awkward and humanlike in media images, chimpanzees grow to become strong and aggressive. About more than two years ago in Connecticut, a pet chimpanzee named Travis mauled and severely disfigured his owner's employee before being shot to death by police. Meanwhile, the International Union for Conservation of Nature lists chimpanzees, which are native to Africa, as endangered.

The advocacy organization Project ChimpCARE estimates that up to 100 privately owned chimpanzees live across the country in basements, garages and backyards, often in unsafe and unsuitable environments.