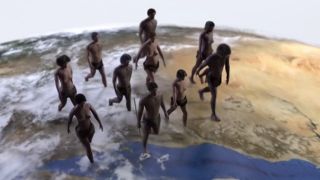 New genetic research suggests that Neanderthals and modern humans interbred about 100,000 years ago, which is much earlier than thought.
(Image: © IVAN HEREDIA / CSIC)

Neanderthals and modern humans may have interbred much earlier than thought, with ancient liaisons potentially taking place in the Middle East, researchers say.

This finding supports the idea that some modern humans left Africa long before the ancestors of modern Europeans and Asians migrated out of Africa, scientists added.

The Neanderthals were once the closest relatives of modern humans, living in Europe and Asia until they went extinct about 40,000 years ago. Scientists recently discovered that Neanderthals and modern humans once interbred; nowadays, about 1.5 to 2.1 percent of DNA in people outside Africa is Neanderthal in origin. Last week, researchers reported that the genetic legacy of the Neanderthal has had a subtle but significant impact on modern human health, influencing risks for depression, heart attacks, nicotine addiction, obesity and other problems.

Now researchers find there may have also been gene flow in the opposite direction, from modern humans to Neanderthals. These findings suggest that modern humans and Neanderthals may have met and interbred about 100,000 years ago, much earlier than thought.

"We find a rather ancient signal of gene flow from modern humans into the ancestors of Neanderthals from the Altai Mountains in Siberia, suggesting that early modern humans had already migrated out of Africa by the time Neanderthals from Europe moved eastward," said study co-author Sergi Castellano, an evolutionary biologist at the Max Planck Institute for Evolutionary Anthropology in Leipzig, Germany.

The researchers found that a group of modern humans contributed DNA to the ancestors of Neanderthals from Altai about 100,000 years ago. In contrast, they did not see this genetic contribution in Neanderthals in Europe, nor in the Denisovan genome.

The scientists noted that the modern human DNA found in the Altai Neanderthals came from a group that diverged from other modern human populations about 200,000 years ago, about the same time the ancestors of present-day African populations separated from one another. The modern human group that interbred with the Altai Neanderthals apparently later went extinct, and are not among the ancestors of present-day people outside Africa, who left that continent about 65,000 years ago, the researchers said.

Castellano and his colleagues speculated that the episode of interbreeding they detected may have occurred in the Levant, the eastern Mediterranean region that includes Israel and Syria. Previous research suggested that modern humans and Neanderthals were present in the Levant as early as 120,000 years ago. Another potential location for this interbreeding was Southern Arabia and the area around the Persian Gulf, they added.

"The exact place where the gene flow occurred is not settled, but the Near East fits the fossil evidence we currently have," Castellano told Live Science.

The scientists detailed their findings in the Feb. 18 issue of the journal Nature.