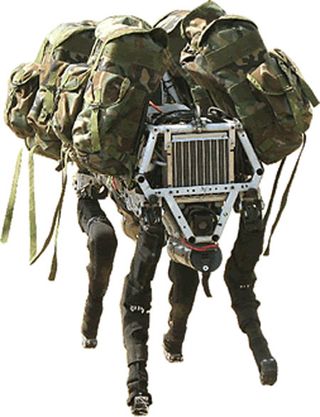 You're shambling the avenue; Bluetooth stuck up your ear, thumbs-a-Twitter. Your GPS-enabled phone is piloting you to a meet-up with your pub posse. You pinch to zoom the map, but the boss' IM interrupts with a snarl about the afternoon meeting so now you're pondering a new spin on "the dog ate my homework."

Meanwhile your calendar is pleading about orphan dry cleaning. And at this moment, that girl from last century pings: She's friend-ing you on Fbook, and "whatcha been up to and how come your profile says you're single" when she thought you'd hooked up semi-permanently with that photographer?

And it's only 2009. Cheer up. It gets a whole lot deeper soon. Everyone will know literally everything about you. And resistance is worse than futile; it will be cleansed.  Sometime this century — likely sooner than later — the trend lines of human vanity, self-indulgence, quest for personal perfection and general laziness will cross with those of computer processing power, machine dexterity, smart search, molecular manipulation and sensor acuity.

The inevitable result: human-robot convergence, the end of us as we knew us.  Say konnichiwa to your successor: Hubot Roboman.

The good news: you get infinite orgasms out of the deal.

Is this how Skynet will spawn the Terminators? Is it Ray Kurzweil's Singularity? Hans Moravec's Mind-Children? The solution to the Fermi-Hart Paradox? Yeah, that's right.  And a whole bunch more. This is the quest for the algorithm of soul.

When President Obama speaks of the Smart Grid, he means that we aspire to create an interactive network of power utilities that is cleverly managed through the flow of information about capacity, supply, demand and environmental impact. It's an essential undertaking, to be sure.

But the truly Intelligent Grid is already up and you're using it now. It's the Telepresent Internet, where updated information on nearly everything is online everywhere all the time. And, in fact, the shifting usage patterns for power that constitute demand on the energy grid will probably bubble up directly from this Telepresent Internet.

Telepresence means the ability to virtually be where you actually aren't. You've done it all your life, since that first time you got on the phone with grandma.

Now that connectivity has exploded and slipped its noose of copper cable, it freely prowls the wireless world. So even as you read this, you are carrying on perhaps a dozen time-shifted interactions and conversations with others via e-mail; you're clicking links; you're searching names and terms. You're accessing the Wisdom Base of All Humanity without moving much more than your fingers.

To prosper in this culture of immersive, always-on telepresence, you — or your portable bandolier of technology — have got to be really good at selectively sucking and synthesizing a staggering amount of information. Thus you upgrade your rig every couple of years. You're already paying per month to access that growing cloud of stuff you care about. And you've become a slave to charging batteries and synchronizing platforms. You're already adorned in wearable devices. Next step for you: implanted ones. Our very human need to "always be on top of things" powerfully pushes us in the direction of robotic enhancement. It's precisely what drove your grandparents to buy that first TV.

This would be a good time to watch a video about all this. Then let's talk about sex ...

We poke fun at Apple Computer co-founder Steve Wozniak on his Segway. But we forget that inventor Dean Kamen's team was originally on a quest to bring eye-level mobility and independent living to people who do not have use of their legs. Thus, Segway's DNA came from the successful IBOT. Indeed, years before Segway, Kamen's first invention, the AutoSyringe, robotically delivered a metered dose of insulin or other therapeutic medications into a patient's IV drip. As technologies gain finesse they enter the realm of biology. The more helpful they become, the more insidious they must grow to be.

But whether a personal robotic innovation is considered an invasion, or an enhancement, is in the mind's eye of the user.

Yes. Of course we will. Some of us do now. We call them vibrators.

One step up is the implanted spinal cord stimulator:  It's been reported since 2004 that a device originally designed for chronic pain control and urinary issues can stimulate orgasm in women — even individuals who thought they'd lost the ability to have them. The appliance is no bigger than a pacemaker, can be wired into a woman's lower back in a physician's office under local anesthetic, is FDA approved (for "bladder problems"), and can be run by remote control. Ask your doctor.

Will you be prepared when she asks you to trigger this device over the Internet in a loving act of telepresent titillation? What happens when this "Orgasmatron" is triggered by intelligent software, in tandem with some fairly straightforward force-feedback actuators, and both are driven by, similarly simple, biometric sensors under some rather rudimentary fuzzy logic?

Answer: the romantic robotic partner.It's not much further along the technology curve to build this package into interactive machinery with humanoid appearance and, well, "feel." Or non-humanoid, if she's feeling adventurous.

The algorithm of soul

What will be your role? Of what use are you? Is there something qualitatively different about our human capacity to be soulful? Something about it we can't pass on to the robots?

The philosophers; answer: "of course!" But the engineers tend to think otherwise. As these systems learn more about us, we need not burn up so much creativity on fantasizing sexual love — or on conjuring romantic love — because more and more of our sensory perception field will become "filled-up" with inputs from the robot. Will this simulated sex get so good as to convince us that it's the real thing? How will we know if it isn't?

At that point, the bedrock notion of sexually bonding with your life-partner goes totally out the hatch. It may linger as vestigial dogma for a generation or two, but it will no longer have any survival value. The good news is that you can say so-long to the worship of a large class of largely useless celebrities: Stardom coupled to sexual desirability — or the inferred aptitude of that star as a great lover, no matter the severity of their psychoses — will cease to work.

Now let's say you have chosen to become enhanced by implant of one or more of these devices — either to give or receive pleasure. You are now a sexy cyborg. Is this ethically any different from the erection pill or the arousal cream you use now? How would you counsel your children? Will you enhance them at some age you consider appropriate?

Fortunately for this author, I'll be able to beg off gracefully from these issues by citing old age. But I may not get away with it.

Why don't we see intelligent extraterrestrials, when the galaxy should be chock full of them? Hubot Roboman tells us the answer: Every technological civilization gets to this point. If you have virtually limitless entertainment everywhere you are, why would you ever go anywhere at all? Any parent whose child plays a game involving a screen and a microprocessor knows this devil all too well. So the number of intelligent species who can kick their addiction to The Too-Easy Life is obviously vanishingly small.

Or, perhaps, the number is very large but they wish each new emerging one (us) to pass the test on their own before they will reveal their presence. If so, then they are already here: the robotic "mind-children" of formerly biological beings. They likely sit just out of site — as a telepresent network of individually very small kernels of machine intelligence.

So the root question becomes: Will we be able to impart ambition and curiosity into Hubot Roboman? You know, that restless "mojo" that propelled waves of us out of northern Africa and into the unknown. If Ray Kurzweil, Hans Moravec, Bill Joy and others are correct that machine intelligence is inevitable with sufficient computational power, we stand at the edge of a quest as amazing as our ancestors' emergence from the water.

But if there's something missing in the translation, then we have a very narrow time window — a generation or two at most — in which to do brave things: Get off the planet; figure out dark energy, write really good music … So much on the to-do list for the future is in deep jeopardy if we can't locate the algorithm of soul.