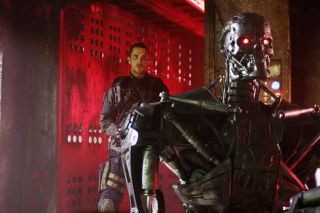 Most science fiction writers claim no predictive powers, but their work often reflects the greatest hopes and fears of humanity for its robotic offspring.

Such stories have actually influenced how researchers and policymakers discuss artificial intelligence. The ideas of Isaac Asimov, for instance, have crossed over into reality more than once — experts commonly cite his "Three Laws of Robotics" as a starting point to discuss a robot code of ethics for interacting with humans. Europe and South Korea have both begun working on such robot ethics charters.

The U.S. company iRobot adopted its name from Asimov's short stories collection, "I, Robot," and currently produces everything from the domestic Roomba vacuum to Packbots for the U.S. military. Meanwhile, military researchers have mentioned the "Terminator scenario" when discussing the distant possibility of a robotic uprising, a reference to the popular movie series about killer robots wiping out humanity.

Rapid advances in technology have also changed our perception of robots in popular culture, as filtered through science fiction stories. The "Terminator" idea of artificial intelligence awakening as a "Skynet" computer network has given way to the mind-bending visions of "The Matrix" series, where humans and artificial intelligence agents battle it out in online virtual worlds. Even the recent Hollywood remake of "The Day the Earth Stood Still" updated the alien robot "Gort" from a clunky metal giant to a super-powered being made of a "nanite" cloud of tiny robots.

This may simply reflect how reality has begun to outpace science fiction, to the point where even the wildest dreams of writers several decades ago now look increasingly likely. More than 40 percent of technology experts polled by the Pew Internet Project foresaw artificial intelligence as increasingly independent and potentially dangerous by 2020.

Still, that leaves more than 50 percent of polled experts being perhaps more optimistic, or at least uncertain. A similar ambivalence shows up in the American Film Institute's 2003 list of top 50 film heroes and top 50 villains. Only one movie character made both lists — the seemingly indestructible Terminator robot played by actor and California governor Arnold Schwarzenegger.

Return Friday for Episode 9: Robots and Humans Lost in Space