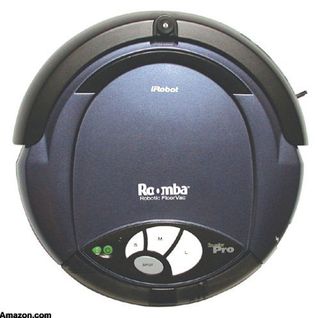 Admit it. You want one. While perhaps not the perfect vacuum, it's hard to complain about something that takes on that task for you.

Using a special headband to capture bioelectric signals from the forehead of a human user, the system collects this data and then infers stress from muscle tension readings. Their control software reinterprets natural muscle tension as estimating the user's stress level; the more muscle tension, the more stress is inferred.

"Two distinct robotic behaviours corresponding to two extreme emotional states, either relaxed or stressed, are triggered when the stress reading reach a threshold. Robot actions are then influenced by these stress readings. When a person shows high stress (~levels 3 & 4), the robot enters its cleaning mode but moves away from the user so as not annoy them. When a person is relaxed (~level 1), the robot (if cleaning) approaches the person and then stops, simulating a pet sitting next to its owner. If the reading is in between these two levels, the robot continues operating in its current mode until the stress reading reaches a threshold."

The unique feature of this system is that the robot's behavior is controlled by human emotion rather than by some sort of explicit commands. There have been other attempts to give robots or computers some ability to sense human emotions. In one study, it was found that nanny robots could sense the emotions of autistic children. Another project — the Sensitive Artificial Listener (SAL) — tried to detect the verbal cues provided by emotional humans.

I can think of several science-fictional predecessors to this achievement. The HAL-9000 computer from 2001: A Space Odyssey was able to tell whether or not the human astronauts were up to the task of making decisions by detecting the amount of stress in voice samples. Here is the famous exchange between Dave Bowman and the HAL-9000 (as found in the novel):

"I can tell from your voice harmonics, Dave, that you're badly upset. Why don't you take a stress pill and get some rest?"

"I'm sorry, Dave, but in accordance with special subroutine C1435-dash-4, quote, When the crew are dead or incapacitated, the onboard computer must assume control, unquote. I must, therefore, overrule your authority, since you are not in any condition to exercise it intelligently."

"Hal," said Bowman, now speaking with an icy calm. "I am not incapacitated. Unless you obey my instructions, I shall be forced to disconnect you."

Another, even more sinister, example can be found in the use of Krell technology in the classic 1956 film Forbidden Planet. In the movie, Dr. Morbius unconsciously uses Krell machinery when sleeping.

The unthinkably powerful Krell technologies act upon his unconscious emotional cues, and destroy his enemies.

Suppose a young man of whom I do not approve comes over to take my teenage daughter out on a date. I hate to think of what a sufficiently stressed person might make a Roomba do...

This Science Fiction in the News story used with permission of Technovelgy.com.