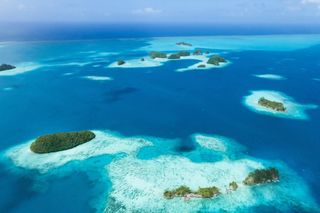 Something about tropical breezes, turquoise waters and stunning scenery seems to be good for the soul. Hawaii has been ranked the top state for well-being, regaining its "happy spot" from last year's winner, Alaska, according to a new survey.

The survey, conducted by Gallup Healthways between December 2015 and January 2016, found that the Aloha State topped the list based on factors such as its residents having a sense of purpose, sense of community, financial well-being and physical well-being. Other healthy and happy states included those in the Mountain West, such as Montana, Colorado and Wyoming, which also topped the list.

Consistent with past survey results, West Virginians reported the lowest sense of well-being, doing so for the seventh year in a row. [See the List of the Happiest US States]

The Gallup Healthways Well-Being Index aggregates data from more than 177 surveys, capturing information from 2.3 million people. From these surveys, statisticians create an overall snapshot of what it's like to live in each state. Well-being is different from the transient emotion of happiness, and includes more than just good health. It encompasses a broad set of factors, ranging from the intangible (such a sense of meaning in life) to the concrete (such as financial security).

To create the well-being index, the Gallup scientists separate survey data into five categories: social factors, a sense of purpose, physical fitness, a sense of community and financial health.

Hawaii was the top-ranked state in large part because of its residents' strong sense of community and good physical health. Other high-ranking states include Alaska, California, much of the Northern Plains and all of the Mountain West. Last year, Alaskans boasted the highest well-being in the country, but from 2009 to 2012, Hawaii held that honor.

On the other end of the spectrum, West Virginia and Kentucky fared the worst in terms of well-being. West Virginia has consistently ranked low in measures of both economic well-being and physical health. For instance, the state was ranked the most obese in 2013, and had the dubious honor of having the most deaths from injury in 2015, thanks in large part to accidental drug overdoses. The state also ranks lowest for citizens getting enough sleep, and has the highest percentage of inhabitants using mood-altering drugs.

Overall, Americans reported about the same sense of well-being as last year. However, fewer people smoke, more people are insured and more people are exercising (at least if their self-reports are accurate). Fewer people in the United States are worried about where their next meal will come from, and fewer experience health care insecurity. However, more Americans than ever are obese, which had a negative impact on overall well-being, the survey found.