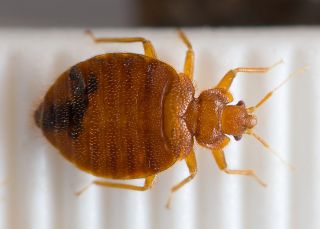 The bedbug's genome is no longer a secret.

Scientists have decoded the insect's DNA, and the findings might lead to new ways to exterminate the blood-sucking parasites, two new studies reveal.

The results may also help researchers map bedbug (cimex lectularius) activity across entire cities, simply by analyzing the DNA the bugs leave behind in public places, such as subway stations, the researchers said. [Bedbugs Q&A: Everything You Need to Know (and More)]

"Bedbugs are one of New York City's most iconic living fossils, along with cockroaches, meaning that their outward appearance has hardly changed throughout their long lineage," study co-author George Amato, the director of the American Museum of Natural History's (AMNH) Sackler Institute for Comparative Genomics, said in a statement. "But despite their static look, we know that they continue to evolve, mostly in ways that make it harder for humans to dissociate with them."

The new studies will help researchers understand the bedbug's basic biology and figure out how to kill it, Amato said.

For instance, the researchers found that the bedbug's gene expression changes after the pest slurps up its first blood meal. Some of these genes code for optimal methods to detoxify and for growing thicker skin, among other features for insecticide resistance. So, perhaps the best time to target bedbugs is during the first nymph stage (there are five nymph stages), before the bug takes its first blood meal, the researchers said.

Bedbugs have fed on the blood of humans for at least 3,000 years. But there's been a recent uptick in infestations, especially in urban areas, with the advent of heated homes and global air travel. Moreover, it's thought that bedbugs have developed resistance to certain pesticides, which may explain the insects' resurgence in the 1990s.

"Bedbugs all but vanished from human lives in the 1940s because of the widespread use of [the insecticide] DDT, but, unfortunately, overuse contributed to resistance issues quite soon after that, in bedbugs and other insect pests," said study co-author Louis Sorkin, a senior scientific assistant in the AMNH's Division of Invertebrate Zoology. "Today, a very high percentage of bedbugs have genetic mutations that make them resistant to the insecticides that were commonly used to battle these urban pests."

To decode the bug's genome, researchers examined its DNA and RNA (a molecule involved with translating DNA into proteins) from both preserved and living collections. The scientists also collected RNA samples from males and females during the bedbug's six different life stages to see how gene expression — for example, expression related to blood feeding, insecticide resistance and other vital functions — changed over time.

Furthermore, the researchers found that bedbugs have an "impressive scope" of anticoagulant genes, study co-author Mark Siddall, a curator in the AMNH's Division of Invertebrate Zoology and the Sackler Institute, told Live Science.

With three different anticoagulant genes, bedbugs are on par with other highly specialized blood feeders, such as the kissing bug (Rhodnius prolixus), which spreads Chagas disease, and the body louse (Pediculus humanus), Siddall said. [Up Close & Personal: See Cool Images of Bedbugs]

After analyzing the bug's genome, the researchers canvassed New York City, looking for evidence of different bedbug communities. The scientists looked at more than 1,400 locations across the city, including every subway station.

Intriguingly (and disturbingly), the city is blooming with bedbug diversity, the scientists found. Bedbug genetic makeup differs widely in different parts of the city, with distinct populations in different boroughs. Researchers said they hope to continue the search, which may help them map bedbug-migration patterns in new environments.

"You can put together a map to understand the relatedness of different populations," Amato told Live Science.

In the other study, researchers found 187 potential genes that encode blood-digesting enzymes, along with an array of salivary proteins that help bedbugs feed on people without causing pain.

The scientists also identified genes associated with insecticide resistance, including those that encode enzymes that can detoxify insecticides, the researchers said.

"Having this knowledge now might enable us to prevent bedbugs from becoming pests at the level of German cockroaches or disease-transmitting mosquitoes," study contributor Michael Scharf, a professor of entomology at Purdue University in Indiana, said in a statement.

Though they worked on the genome studies separately, the two groups are now collaborating to map the mitochondrial DNA (genetic data passed down by females) in bedbugs, Amato said.

"It's a wonderful opportunity to combine our results and expertise," he said.

Both studies were published online today (Feb. 2) in the journal Nature Communications.