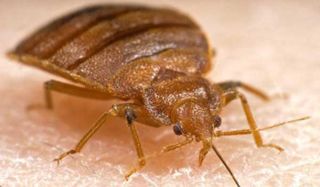 Adult bedbugs, which look like flat, reddish-brown ovals, are wingless and can grow to three-sixteenths of an inch long.
(Image: © ranklincountyohio.gov)

Bedbugs are stubborn little beasts. They are a growing problem in cities across the United States, and experts are unsure of the safest way to go about exterminating these pesky insects.

The federal government recently rejected Ohio officials' request to use an industrial pesticide to fight household infestations of bedbugs.

The pesticide, Propoxur, is already being used in commercial buildings, on crops and in pet collars, but has been declared unsafe to use in private homes. U.S. Environmental Protection Agency Administrator Lisa Jackson announced that Propoxur could pose health risks for children and harm their nervous systems.

Bedbugs can live for up to a year without a meal, but they normally try to feed every five to 10 days. Although they are not known to transmit disease, they are extremely hard to eradicate, depending on the severity of the infestation. Some species of the pesky insects have been shown to have developed a resistance to pesticides.

Bedbugs can be eliminated using safe chemical treatments, fumigation and vacuuming, but these techniques typically must be repeated to get rid of the infestation.

An extermination of a bedbug outbreak must be completely thorough to be effective if even one female bug survives, the area may become re-infested, as an adult female bedbug lays up to five eggs every day, with each egg taking only seven to 28 days to hatch. Each can lay several hundred eggs over its lifetime.

To make sure that no bedbug hiding place is overlooked during the often tedious search and destroy missions, some people even hire bedbug-sniffing dogs.

Bedbugs were believed to be eradicated in the United States during the 1950s through the use of DDT, a synthetic pesticide that sparked controversy over its safety and impact in the environment. Biologist Rachel Carson penned "Silent Spring" as a warning about the dangers of using DDT, sparking a public outcry that led to the banning of the chemicals in 1972.

Bedbug complaints have steadily risen since the vampiric insects reemerged in 1995, according to the Department of Health and Mental Hygiene. There are several species, but the one best adapted to human environments is Cimex lectularius, also known as the common bedbug. Adult bedbugs, which look like flat, reddish-brown ovals, are wingless and can grow to three-sixteenths of an inch long.

Once they are inadvertently transported into a home by hitching a ride on clothing or another object, the bedbugs tend to hide and wait for nightfall, when they can come out to feed unnoticed by the host. The parasitic insects are attracted to the warmth and carbon dioxide that a sleeping person's body generates. They pierce the skin and withdraw blood for about five minutes before retreating to their hiding place.

The telltale red, inflamed welts of bedbug bites are a result of their feeding technique they prick two hollow tubes through the skin, with one withdrawing the blood and the other injecting the host with the bug's saliva, which contains anesthetic agents and prevents the blood from clotting. The clusters of itchy bite bumps normally show up within a few hours to a few days later as a reaction to the injected agents.