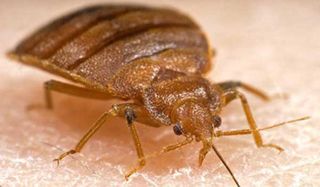 Adult bedbugs, which look like flat, reddish-brown ovals, are wingless and can grow to three-sixteenths of an inch long.
(Image: © ranklincountyohio.gov)

After decades of apparent absence, bedbugs are back with a vengeance. The bugs have returned to U.S. cities, infesting hotels, schools, apartments, homes, stores and offices. The tiny bloodsuckers are known to leave red, itchy marks on their victims, as well as a social stigma.

But where did bedbugs come from, what harm do they really cause, and why the sudden resurgence?

LiveScience spoke with Louis Sorkin, an entomologist at the American Museum of Natural History, whose research on bedbugs has crossed into a personal realm. Sorkin keeps four jars of the creatures, which he feeds periodically on his arms and legs. [Bedbugs: The Life of Mini-Monster (Infographic)]

When did the resurgence begin? In the late 1980s is when somebody brought me a live bedbug to look at; I had never seen a live one before. I would say at least in the mid '90s you started seeing many more infestations.

What do you think is causing the recent resurgence? I think one of the major factors was the lack of education for the general public in bedbug identification and monitoring. Before incidents started increasing there really wasn't any level that attracted cause for alarm, so people really didn't have bedbugs on their minds so no one worried about them. Then they sort of snuck up on us, because they were under the radar.

Some news reports have suggested the ban on the pesticide DDT in 1972 played a role. Did it? No, actually DDT resistance in bedbugs and other insects was beginning in the late '40s, early '50s also. So that is why the instructions were to use other insecticides that were coming out to replace DDT, because of the resistance issue. It was a cheap insecticide, it worked well and lasted a long time, almost anyone was able to get some and use it.

You mentioned DDT and modern pesticides called pyrethroids contain the same "killing mechanism." How have modern pesticides contributed to the resurgence? Oh, yes. … so the bedbugs already have a method in their systems to detoxify the active ingredient in some of the newer pyrethroids. [But] there are some that work well and there is no resistance issue… It is also important that not one class of insecticides be used only to combat bedbugs, but you have different versions of them incorporated into a set method of bedbug eradication and all that is coupled with an integrated pest management approach so as not to rely solely on insecticide to get rid of a bedbug infestation.

[An integrated pest management would also include: monitoring their population; using a vacuum cleaner to suck them up and discarding the bag; killing the bugs and their eggs with steam; and caulking or painting to fill in cracks or crevices, according to Sorkin.]

Did anything else contribute? All the insecticides used over the years became reduced to baiting systems for cockroaches and ants, and also bedbugs weren't in anyone's mind because it was something you didn't really see, maybe included only as an a line or two about bedbugs in pest management manuals for technicians who work for pest management companies. So, of course when bedbug infestations started taking off, there weren't any good instructions for people. They were sort of being treated as cockroach infestations. That soon changed... The more work they did and the more they learned and realized it was very different from cockroach control, and you had to pay much more attention to detail and know a lot more about the bedbugs in order to discover where harboring areas were, different treatments to use and different preparations of products to use.

What are our prospects? Will infestations only get worse? It is still continuing, we have a few years to go, I am sure. By then there may be better detection devices, electronic devices, there will be better education for people and people might change certain behaviors to reduce the possibility of bedbug infestations. Maybe there will be different cleaning techniques or different cleaning solutions.

What behaviors should change? I suppose being nonchalant about traveling would change a lot and not being alert to the possibility of bedbug infestations at a certain hotel where you are staying or homes you are staying in. Or a new bedbug law. [New York State passed a law this summer requiring landlords to disclose a one-year history of bedbug infestations] … Maybe people will have preventive measures performed in new apartments or maybe even construction people may design to reduce bedbug populations, or create structures in their apartments or office space or buildings to allow easy investigation of areas that are now hidden from view.

Do all bedbugs look alike – quarter-inch long and reddish brown? That is the adult stage only, so the five immature stages and the egg go without notice. … They are not reddish brown, they are translucent white in the first instar [nymph], continuing through a straw color up through the fifth instar [nymph]... [Nymphs vary from being plump and red, to nearly flat with dark brown masses of blood being digested in their gut. Fed adults, meanwhile, are plump and reddish brown. Adults are around a quarter inch in length, but the immature first instar nymph is about as long as a credit card is thick, according to Sorkin.]

Do bedbugs spread disease? With all the research that began when bedbugs were a problem 50 years ago and sort of waned and now is increasing, there has been no evidence they transmit pathogens to people even though well over 20 to 40 different pathogens have been isolated from bedbug bodies, but that is because they fed on people who had those pathogens in their blood system. But they never transferred [the pathogens] in studies to the next host.

Did you become interested when you saw that first live bedbug? In the 80s, yeah, then speaking over the years with people who also worked on bedbugs and one person who had been raising bedbugs from a population he collected in early 1970s from Fort Dix [the Army base in New Jersey], and he said, 'Oh, I can send you a jar of bedbugs if you want.' I decided to raise them and watch them. I have four jars now. Some are a little more crowded than others; I feed them more… On my arms and legs, mostly the arms, it's just easier to do.

What have you learned by watching them? They have healthy appetites. But it's interesting to watch their behaviors before feeding and how they congregate in areas after feeding, and how they harbor and where they go and interact with one another and clean themselves.

What are its mouthparts like? It's a piecing system… In the bugs their mouthparts are modified to form a fascicle composed of mandibular and maxillary stylets – they are like slender modified shafts for cutting or piercing and cutting, but you have a right and left side. Then by connecting the right and left side you now have canals in the center, a large one for blood to be sucked up and a smaller one to actually inject saliva, and in the saliva there are components for anticoagulation and for anesthesia.

What's it like to have bedbugs feeding on you? At first, I had never done it before so I wasn't sure how I would react to hundreds of bedbugs feasting at one time. Not surprisingly the area swelled and became red, but surprisingly there was no itching associated with it at all, and to this day, there still isn't any itching. And the reaction I have has reduced dramatically from the first feedings I did.

That actually may reflect what is happening in a natural setting in some people's homes who have bedbugs for many years, like 5 to 10 years and have gotten used to the bites… They don't have a bad reaction, of course their neighbors are wondering why all these bedbugs are crawling around their homes.

Does itching normally accompany bites? Some people have absolutely no reaction to being bitten by a bedbug, and I know some people and some dog handlers who experience that. They are able to feed the bedbugs with which they train the dogs. [Dogs are being trained to sniff out bedbugs.] It varies, up to the other person who has an extreme, excruciating reaction on the skin... I think if people didn't necessarily scratch the bedbug's bite it may not continue to itch, because I have felt the itching starting, and I leave it alone, and it stops.