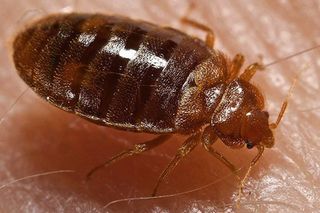 The common bed bug mainly survives on human blood, but what happens when that human has upped his or her blood alcohol content with a few glasses of a nice red wine? New research from the University of Nebraska-Lincoln suggests bed bugs are not as fond of alcohol as their boozy hosts, which may lead to fewer bug bites.

According to the study, bed bugs prefer alcohol-free blood to blood with alcohol in it; the higher the blood alcohol concentration (BAC), the less the bugs eat. And, because there is a direct link between blood intake and reproduction rates, those bugs also lay fewer eggs.

"[Bed bugs] need a blood meal to grow and to molt and to reproduce," explained Ralph Narain, a Ph.D. candidate who conducted the work as part of his dissertation. "And one of their main hosts are humans, and we consume a lot of stuff. Alcohol was one of the easier ones to start with."

Narain presented the findings last week at the National Conference on Urban Entomology in Atlanta.

While it's fun to imagine graduate students knocking back beers and feeding bed bugs on their arms, Narain took a more scientific approach in his experiment. He mixed 200 proof ethanol — the same compound estimated by a Breathalyzer — into four samples of expired blood from the Nebraska Blood Bank until he had BACs of 0.010, 0.025, 0.050 and 0.100 (0.08 is the legal limit for driving). A control sample contained no alcohol.

Next, he selected 20 adult bed bugs for each blood sample, weighed them, fed them their respective samples, and weighed them again. He repeated the experiment six times.

It's unclear whether the alcohol affected the adult bugs' behavior or their offspring's development, although future tests might attempt to measure both. Narain also plans to run tests on other drugs, although he wouldn't officially disclose which.

So, can we just knock back a few glasses of wine every night to keep the bed bugs away? Probably not. "I'm not going to suggest someone should consume alcohol to control bed bugs," Narain said.

Ill health affects aside, it likely wouldn't help curb an infestation. While the bed bugs do feed less on alcohol-laced blood, they still feed, and while they lay fewer eggs, up to 95 percent still hatch. And it just takes a few to create a nuisance.

Dini Miller, an entomologist and bed bug expert from Virginia Tech, agreed: "I don't know what sort of implications it has ultimately, because unfortunately they still produce enough eggs to cause an infestation. So while they feed less, still, we're not going to experience less of a problem. But it's very interesting to know."

Brooke Borel is a contributor to Life's Little Mysteries, and is currently writing a book about bed bugs. For more crazy bed bugs stories, follow her on Twitter: @brookeborel