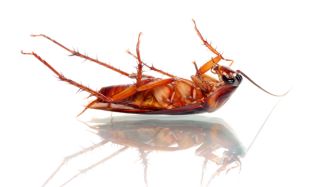 Dead or dying insects assume a familiar pose: lying on their back, legs sticking up in the air. This tell-tale position is actually a symptom of an ailing bug's decreased coordination and failing nervous system.

Normally, if a bug is knocked onto its back, it can use its legs to rock on its sides until it rights itself. If, however, the bug can't roll back onto its abdomen because it has become too weak or because its nervous system isn't functioning properly, it remains stuck on its back.

Because the bug can't get nutrients or protect itself from predators or the elements when it's immobilized in this position, it soon dies if it can't flip back over.

Several things can hinder an insect's ability to resituate itself. Ingesting pesticides and insecticides such as bug spray disrupts the bug's neurotransmitters and shuts down its nervous system. As a side effect, most pesticides cause an insect to go into convulsions, during which it uncontrollably kicks up its legs and often gets stuck on its back.

With its nervous system compromised and its coordination declining, the bug lacks the ability to synchronize all of its legs in order to roll over onto its side and stand back up. Depending on the pesticide, a bug can die within hours or days of ingesting the poison.

An injury or a lack of food or water can also compromise a bug's ability to right itself. Or the bug could simply be at the end of its lifespan and its strength and coordination abilities are declining.