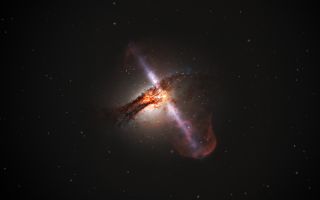 Quantum teleportation of subatomic particles could be used to retrieve information from a black hole, a new algorithm suggests.

The information that can be extracted from this hypothetical black hole is quantum information, meaning that instead of existing in either a 0 or 1 state, like a classical bit, the data collected would exist as a superposition of all potential states.

"We've demonstrated concretely that it is possible, in principle, to retrieve some quantum information from a black hole," said study co-author Adam Jermyn, a doctoral candidate at the University of Cambridge in England. [The 9 Biggest Unsolved Mysteries in Physics]

But don't go tossing your computer into the nearest black hole just yet. The amount of information that can be retrieved is tiny — just one quantum bit, or qubit. What's more, getting that bit would likely mean sacrificing the possibility of retrieving other quantum information from the black hole, the researchers reported in October 2015 in the preprint journal arXiv.

Most people think that nothing can escape from black holes— compact, enormously dense celestial objects such as collapsed stars whose gargantuan gravitational field prevents light and matter from escaping. But it turns out that's not quite true — some information can be retrieved from the clutches of a black hole.

In the 1970s, physicist Stephen Hawking predicted how this might work. Because quantum particles act like waves, their position is described as a probability range of all locations — including positions both inside and outside the black hole. Thus, it remains possible, though improbable, for some subatomic particles to use quantum tunneling to escape a black hole.

In this case of quantum tunneling, quantum radiation leaks from the edges of a black hole in a process dubbed "Hawking radiation." That radiation is thought to be incredibly dim — so dim, in fact, that it has never been detected, though most scientists are confident it's real. [Video: Black Holes Warping Space-Time]

But things get trickier when the piece of data is a qubit because of the weird way quantum mechanics works. A qubit exists in multiple entangled states at once, but the very act of measuring the tiny particle's state forces the qubit to "choose" one state, which would then eliminate the other information it carried.

So, by looking at the state of the outgoing particle from the Hawking radiation, physicists could theoretically deduce information about the incoming particle.

"The trick is to do all this without 'looking,'" Jermyn told Live Science. If they directly measure the spin state of the outgoing Hawking radiation, they force it to choose a spin state, and they lose the quantum information it carries and, with it, the ability to deduce the original particle's spin state.

So instead, the algorithm took an indirect measurement of the spin of the black hole, the original infalling particle and the Hawking radiation that was swept in as well. The trick? They don't measure everything they could; the measurements only tell the researchers whether the angular momentum has changed or not, but not in which direction, Jermyn said.

These nonmeasurements "give you some information, but not so much that you lose all the quantum mechanical information in it," Jermyn told Live Science.

From the measurements, they could back-calculate the angular momentum spin orientation of the original qubit that fell in, showing how, in theory, someone could retrieve quantum information from a black hole.

The practical applications of the new method are limited, to say the least.

For one, "you can't accidentally throw [a qubit] in and then say 'whoops' and try to get it back; you have to have been planning to throw it in," Jermyn said. So, people who accidentally wiped their data by tossing it into a black hole would be out of luck, he added.

Their method also retrieves just one qubit of information, and it's likely that not much more could be retrieved even if the algorithm were developed further, Jermyn added.

Beyond that, physicists don't even agree in theory on how much data could be retrieved from a black hole.

"It's possible the information escapes in the same fashion that, when you delete a file on your computer, technically, the information still exists — it's just been scrambled," Jermyn said. "It's also possible that there's a fundamental limit on how much you can get out before it gets scrambled beyond recognition."

In any case, the nearest black hole is too distant for scientists to test the algorithm. But in principle, scientists could create tiny black hole analogues in the lab, using supercooled aggregates of particles known as Bose-Einstein condensates. In that case, scientists would use voltage to create an impermeable "divide," similar to a black hole. Such systems could be used to probe some of these theories about black holes, Jermyn said.