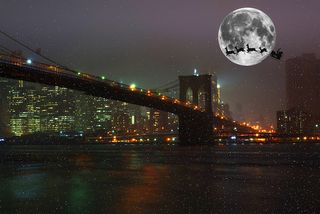 Santa Claus is coming to town in five days, 12 hours and 3 minutes. And this year, you can once again keep tabs on old Saint Nick's every move with help from the North American Aerospace Defense Command (NORAD).

For the past 60 years, NORAD has tracked Santa's movements around the globe from the organization's headquarters at Peterson Air Force Base in Colorado Springs, Colorado. Most days, the folks at NORAD use the organization's advanced radar systems and satellite imagery to watch for potential ballistic missile threats. But every year around Christmas, NORAD personnel start scanning the skies for Santa's sleigh, as well.

In addition to its usual weapons-tracking systems, NORAD enlists some special tools to monitor every move made by the big guy in red. High-speed digital cameras, or Santa Cams, capture still images and videos of Santaas he loads up his sleigh at the North Pole and sets off on his nightlong journey around the world. These action shots of Saint Nick at work can be viewed on NORAD's Santa Tracker website right after they're taken. [6 Surprising Facts About Reindeer]

But you'll have to wait until Christmas Eve to get a close-up view of Santa. Log onto the Santa Tracker site anytime after 12:01 a.m. MST (2:01 a.m. EST/11:01 p.m. PST) on Thursday, Dec. 24, to catch a glimpse of Santa packing his sleigh. Once he takes to the skies, you can keep tabs on him by checking the Santa Tracker website, or you can email NORAD (noradtrackssanta@outlook.com)to see where in the world Santa is at the moment. You can also follow @NoradSanta on Twitter, Facebook, YouTube or Google+ for regular updates as to Saint Nick's whereabouts.

If you want to honor NORAD's Santa-tracking roots, then give the organization a ring at 1-877-Hi-NORAD. Kids (and kids at heart) have been calling that number to find out where in the world Santa is on Christmas Eve since 1955. The tradition started when a local business in Colorado Springs advertised a Santa hotline that children could call on Christmas Eve. But the company listed the wrong number on its advertisement, and when kids called the number, Santa didn't answer. Instead, Col. Harry Shoup, then commander in chief of the Continental Air Defense Command (CONAD), the predecessor to NORAD, fielded the phone calls.

Clearly a good sport, Shoup went along with the children's lines of questioning, periodically checking NORAD's radar for signs of a giant sleigh led by a red-nosed reindeer. He was the first of many good-spirited servicemen and women to track Santa in action.