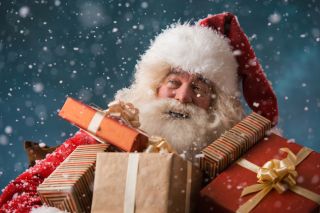 When is Santa coming? It's a question that pops up a lot this time of year. But Santa fans can rest assured they'll get a quick, detailed answer to that query this holiday season, thanks to the folks at the North American Aerospace Defense Command (NORAD).

For more than 50 years, NORAD has been tracking Santa's journey from chimney to chimney from the agency's headquarters at Peterson Air Force Base in Colorado Springs, Colorado. The organization — which usually keeps an eye out for threats from ballistic missiles — uses its advanced radar system, as well as satellite imagery, to follow Mr. Claus' flight path from the North Pole.

NORAD also has a collection of "ultra-cool, high-tech, high-speed digital cameras" that will be used to snap pictures and videos of the man in red as he delivers gifts to everyone on his "nice list." The candid shots from these SantaCams will be immediately posted on NORAD's website. [6 Surprising Facts About Reindeer]

Of course, the cameras aren't likely to catch a glimpse of Santa until Dec. 24, when he loads up his sleigh, harnesses his reindeer and takes off from the North Pole. But, if you want to catch a glimpse of Santa Clausas he makes his flight preparations, log onto the NORAD Tracks Santa website starting at 12:01 a.m. MST (2:01 a.m. EST/11:01 p.m. PST) on Christmas Eve.

Once Santa takes off, you can watch his progress on the site or email NORAD to ask for an update on Santa's whereabouts. Tech-savvy Santa trackers can also download the Santa tracking app on their smartphones and tablets, or search the Web for "@noradsanta" to follow his movements on social media.

If you'd rather track Santa by phone, you can do that, too. NORAD personnel will be standing by to answer calls from those eager to know when their presents will be arriving. Kids have been calling NORAD since 1955, which is when the organization's Santa-tracking efforts began.

The tradition started when a local business in Colorado Springs advertised a Santa hotline that children could call into on Christmas Eve. Unfortunately, the company listed the wrong number on its advertisement. Instead of getting Santa on the phone, they got Col. Harry Shoup, then commander-in-chief of the Continental Air Defense Command (CONAD), the predecessor to NORAD.Not wanting to disappoint these merry callers, Shoup checked the radar for signs of a giant sleigh led by a red-nosed reindeer. In so doing, he became the first of many servicemen and women to track Santa in action.