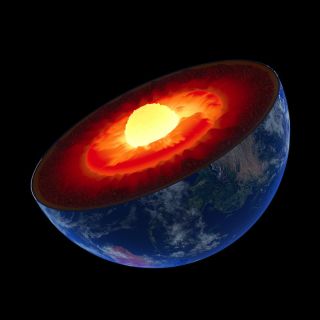 SAN FRANCISCO — Scientists have jury-rigged a microwave oven and a liquid made of food and cosmetics thickener to recreate the Earth's mantle, the mysterious middle layer of the planet.

The mock-up mantle could help scientists determine whether a hidden pool of radioactive elements is producing heat deep in Earth's interior, Angela Limare, a physicist at the Institut de Physique du Globe de Paris in France, said Tuesday (Dec. 15) here at the annual meeting of the American Geophysical Union.

"It looks like the upper mantle is really depleted of radioactive elements," Limare said. "If they are not in the upper mantle, they must be somewhere below." [In Photos: Ocean Hidden Beneath Earth's Surface]

The Earth's mantle is a molten mass of unanswered questions. The rocky shell between the core and the crust makes up four-fifths of the planet but is the least understood portion. Because it begins anywhere from 5 miles (8 kilometers) to 20 miles (32 km) below the planet's surface and extends about 1,800 miles (2,900 km) below the Earth's surface, scientists can't drill deep enough to determine what it's made of, how the elements in the mantle are distributed or exactly how it moves. Instead, they often use a process called seismic tomography to send seismic waves through the Earth and then analyze their return paths to infer its composition. Volcanologists may also sample the elements in magma from volcanoes that oozes up from mantle plumes deep in the Earth, Limare said.

One question in particular has long puzzled scientists. The Earth generates about 46 terawatts of heat. Scientists have calculated that about 8 terawatts come from the continental crust floating atop the mantle, while heat generation from the core, which sustains Earth's magnetic field, contributes another 10 to 16 terawatts. This means that about half of Earth's heat is generated by the radioactive decay of elements in the mantle.

The trouble is, seismic tomography suggests that, except for the top and bottom of the mantle, radioactive elements are sprinkled evenly throughout the mantle, and the concentration of those radioactive elements seems to be too low to generate the remaining heat, Limare said. And at the bottom of the mantle, seismic tomography detects two large regions of slow-moving material that must be chemically distinct from the rest of the mantle.  Meanwhile, magma from volcanoes fed by mantle plumes that reach deep into the lowest depths of the mantle can show different chemical compositions, even if the volcanoes are separated by just a handful of miles, she said. Altogether, that suggests there could be material at the innermost layer of the mantle that is very different in composition from the rest of the mantle.

As a result, some scientists have proposed that a hidden reservoir of radioactive elements lurks deep in the mantle and produces the missing heat. If this hidden reservoir exists, it must be very stable and must not be mixing with the rest of the ever-churning mantle, because otherwise, seismic tomography would have detected it, Limare said.

With no way to experimentally test this notion, however, geophysicists have been left to hash out their debates in a flurry of models, equations, numerical theories and simulations. [Photo Timeline: How the Earth Formed]

So, Limare and her colleagues decided take a more hands-on approach. They simulated the mantle using a sheet of cellulose-derived Natrosol that was 11.8 by 11.8 by 2 inches (30 by 30 by 5 cm) thick. At first glance, a small, viscous liquid may seem to have very little in common with 1,800 miles of sandy rock that make up the mantle.

But by carefully calibrating some of the properties of the gel — such as its depth, length, viscosity and temperature — the researchers can create a scaled-down model with heat and fluid transport properties very similar to those of the mantle. Limare's team used the Natrosol because it is very easy to vary its viscosity by adding more or less water, while the material can be made denser by sprinkling in salt or.less dense by thinning with alcohol. The material also makes it easy to create two adjacent layers of the "mantle" with different properties, she said.

Next, the scientists mimicked the extremely uniform internal heat generation of radioactive elements inside the mantle. For that, they looked to a ubiquitous household appliance — the microwave oven. Microwaves enter and are absorbed by the food, and generate internal heat in the process.

"That's how we heat up food; it's exactly the same process," Limare told Live Science.

Of course — do we even need to say it? — don't try this at home! The researchers' microwave may have started out as a commercial oven, but it's been eviscerated and tricked out with sophisticated and high-tech modifications, from liquid crystal thermometers to laser sheets to fancy cameras that operate in two different wavelength ranges.

"The only thing left from the commercial stuff is the external box and the door, because the door is very well done," Limare said.

In the experiment, the boundaries between the Earth's layers are not exactly true to life; the mantle rubs against the molten core and the bottom of the continental crust, but the Natrosol mixture had to be put in a plexiglass container so it wouldn't lie in a puddle at the bottom of the microwave, Limare said.

Narrowing in on the hidden reservoir

Still, the model has already provided a few early insights. For instance, when the researchers modeled a mantle with a dense, low-viscosity "hidden reservoir," rivers of heat flowed from the top of the mantle to the bottom. If these rivers of heat reach far enough into the mantle, they would destabilize a hidden reservoir of radioactive elements lurking at the bottom of the mantle. So if a hidden reservoir does exist, it probably wouldn't density, thickness and other characteristics that create a destabilized regime in the mockup mantle, the researchers said.

The microwavable mantle is important because it could help scientists narrow the range of conditions that could exist in a hidden reservoir of radioactive elements, said Gaël Choblet, a planetary interior researcher at the CNRS (Centre national de la recherche scientifique) and the University of Nantes in France, who was not involved in the current study.

The new technique is novel because it's the first time scientists have produced extremely uniform internal heating in a viscous material that can mimic the mantle, Choblet told Live Science.

Though the new results on their own are unlikely to solve the mystery of the hidden reservoir, "it's always very good to compare laboratory experiments and numerical models," Choblet said. "The comparison is usually quite fruitful."