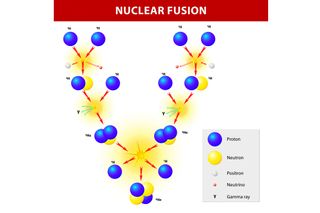 The weak force is one of the four fundamental forces that govern all matter in the universe (the other three are gravity, electromagnetism and the strong force). While the other forces hold things together, the weak force plays a greater role in things falling apart, or decaying.

The weak force, or weak interaction, is stronger than gravity, but it is only effective at very short distances. It acts on the subatomic level and plays a crucial role in powering stars and creating elements. It is also responsible for much of the natural radiation present in the universe, according to the Thomas Jefferson National Accelerator Facility (Jefferson Lab).

Italian physicist Enrico Fermi devised a theory in 1933 to explain beta decay, which is the process by which a neutron in a nucleus changes into a proton and expels an electron, often called a beta particle in this context. "“He defined a new type of force, the so-called weak interaction, that was responsible for decay, and whose fundamental process was transforming a neutron into a proton, an electron and a neutrino," which was later determined to be an anti-neutrino, wrote Giulio Maltese, an Italian physics historian, in "Particles of Man," an article published in 2013 in the journal Lettera Matematica.

According to Maltese, Fermi originally thought that this involved what amounted to a zero-distance or adhesive force whereby the two particles actually had to be touching for the force to work. It has since been shown that the weak force is actually an attractive force that works at an extremely short range of about 0.1 percent of the diameter of a proton, according to HyperPhysics, a website produced by Georgia State University.

The weak force is part of the reigning theory of particle physics, the Standard Model, which describes the fundamental structure of matter using an "elegant series of equations," according to CERN, the European Organization for Nuclear Research. Under the Standard Model, elementary particles — that is, those that cannot be split up into smaller parts — are the building blocks of the universe.

One of these particles is the quark. Scientists haven't seen any indication that there is anything smaller than a quark, but they're still looking. There are six types, or "flavors," of quarks: up, down, strange, charm, bottom and top (in ascending order by mass). In different combinations, they form many varied species of the subatomic particle zoo, according to the Pittsburgh Supercomputing Center. For example, protons and neutrons, the "big" particles of an atom's nucleus, each consist of bundles of three quarks. Two ups and a down make a proton; an up and two downs make a neutron. Changing the flavor of a quark can change a proton into a neutron, thus changing the element into a different one.

Another type of elementary particle is the boson. These are force-carrier particles that are made up of bundles of energy. Photons are one type of boson; gluons are another. Each of the four forces results from the exchange of force-carrier particles. The strong force is carried by the gluon, while the electromagnetic force is carried by the photon. The graviton is theoretically the force-carrying particle of gravity, but it has not been found yet.

The weak force is carried by the W and Z bosons. These particles were predicted by Nobel laureates Steven Weinberg, Sheldon Salam and Abdus Glashow in the 1960s, and discovered in 1983 at CERN.

W bosons are electrically charged and are designated by their symbols: W+ (positively charged) and W− (negatively charged). The W boson changes the makeup of particles. By emitting an electrically charged W boson, the weak force changes the flavor of a quark, which causes a proton to change into a neutron, or vice versa. This is what triggers nuclear fusion and causes stars to burn, according to CERN. The burning creates heavier elements, which are eventually thrown into space in supernova explosions to become the building blocks for planets, along with plants, people and everything else on Earth.

The Z boson is neutrally charged and carries a weak neutral current. Its interaction with particles is hard to detect. Experiments to find W and Z bosons led to a theory combining the electromagnetic force and the weak force into a unified "electroweak" force in the 1960s. However, the theory required the force-carrying particles to be massless, and scientists knew that the theoretical W boson had to be heavy to account for its short range. According to CERN, theorists accounted for the W's mass by introducing an unseen mechanism dubbed the Higgs mechanism, which calls for the existence of a Higgs boson. In 2012, CERN reported that scientists using the world's largest atom smasher observed a new particle "consistent with the appearance of a Higgs boson."

The process in which a neutron changes into a proton and vice versa is called beta decay. According to the Lawrence Berkeley National Laboratory (LBL), "Beta decay occurs when, in a nucleus with too many protons or too many neutrons, one of the protons or neutrons is transformed into the other."

Beta decay can go in one of two ways, according to the LBL. In beta minus decay, sometimes annotated as β− decay, a neutron decays into a proton, an electron and an antineutrino. In beta plusdecay, sometimes annotated as β+ decay, a proton decays into a neutron, a positron and a neutrino. One element can change into another element when one of its neutrons spontaneously changes into a proton through beta minus decay or when one of its protons spontaneously changes into a neutron through beta plus decay.

Protons can also turn into neutrons through a process called electron capture, or K-capture. When there is an excess number of protons relative to the number of neutrons in a nucleus, an electron, usually from the innermost electron shell, will seem to fall into the nucleus. According to Jacquelyn Yanch, a professor in the nuclear engineering department at Massachusetts Institute of Technology, in a 2001 paper "Decay Mechanisms," "In electron capture, an orbital electron is captured by the parent nucleus, and the products are the daughter nucleus and a neutrino." The atomic number of the resulting daughter nucleus is reduced by 1, but the total number of protons and neutrons remains the same.

The weak force plays an important role in nuclear fusion, the reaction that powers the sun and thermonuclear (hydrogen) bombs. The first step in hydrogen fusion is to smash two protons together with enough energy to overcome the mutual repulsion they experience due to the electromagnetic force. If the two particles can be brought close enough to each other, the strong force can bind them together. This creates an unstable form of helium (2He), which has a nucleus with two protons, as opposed to the stable form of helium (4He), which has two protons and two neutrons.

The next step is where the weak force comes into play. Because of the overabundance of protons, one of the pair undergoes beta decay. After that, other subsequent reactions, including the intermediate formation and fusion of 3He, eventually form stable 4He.