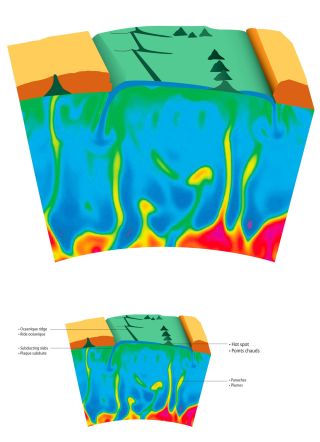 An illustration showing how a mantle plume can be emitted from the core-mantle boundary of the Earth to reach the Earth's crust. Due to the movement of tectonic plates at the Earth's surface, the mantle plumes can create a series of aligned hot spot volcanoes. A mid-ocean ridge and a subducted plate are also shown in this schematic from a study in the July 19, 2012 issue of the journal Nature.
(Image: © ESRF/Denis Andrault/Henri Samuel)

Enormous rivers of hot rock spanning hundreds of miles across and reaching all the way down into the planet's metal-rich core have been seen for the first time.

The searing-hot plumes, which feed volcanoes on the surface, are likely themselves fed by two "superblobs" beneath Africa and the Pacific Ocean, the researchers said.

The new finding comes from supercomputer visualizations of the Earth's interior derived from seismic data on hundreds of earthquakes over the last several decades.

For decades, scientists have debated the existence of mantle plumes, or hot columns of magma that rise in the Earth's mantle, the layer between the crust and the molten iron and nickel outer core.

Earth's crust floats on a layer of molten rock known as magma. The dominant theory is that volcanoes form where one tectonic plate dives beneath another, squeezing magma up through fissures in the Earth's crust.

But volcanoes, such as those that form the Hawaiian Islands and Iceland, often erupt far from any plate boundary. In 1971, geologist W. Jason Morgan proposed a completely different mechanism for the formation of these off-plate volcanoes: deep jets of magma coming straight from the mantle-core boundary.

In this hypothesis, the fat head of the mantle plume creates a hot pocket in the Earth's crust, creating a volcanic core. As the plates move and the position of the hotspot changes relative to the surface, this process would create a string of volcanic islands — such as those found in Hawaii and the Galapagos Islands. [Infographic: Tallest Mountain to Deepest Ocean Trench]

But no one had definitively shown that such deep-dwelling rivers of molten rock existed.

In the new study, researchers created the equivalent of a computed tomography (CT) scan for the planet based on seismic data from 273 strong earthquakes that occurred over the last two decades. As the earthquakes shook the planet, seismic waves ricocheted inside the planet's interior. By recreating the zigzagging paths of those waves using a supercomputer simulation, the team revealed the temperature and extent of plumes in the interior.

The researchers found molten jets that were about 700 degrees Fahrenheit (400 degrees Celsius) hotter than the nearby rock. These plumes stretched from the Earth's crust all the way to the boundary between the mantle and the core, more than 1,800 miles (2,900 kilometers) below the surface. And these rivers of molten rock seem to consist of a different type of rock than the rest of the mantle.

One surprise: Deeper in the mantle, these plumes become incredibly wide — up to 600 miles (1,000 km) across. The mantle plumes also have a different shape than previously predicted. Historically, geologists thought mantle plumes had narrow bases and fat heads, which sat right beneath volcanic island chains. Instead, as the tops of the plumes bump against the less viscous upper mantle rock, the plumes fan out like branches of a tree, the researchers reported today (Sept. 2) in the journal Nature.

"These columns are clearly separated in the lower mantle, and they go all the way up to about 1,000 km below the surface, but then they start to thin out in the upper part of the mantle, and they meander and deflect," study co-author Barbara Romanowicz, an earth and planetary scientist at the University of California, Berkeley, said in a statement. "So while the tops of the plumes are associated with hotspot volcanoes, they are not always vertically under" the volcanoes.

The plumes seem to emanate from two gigantic masses of hot rock, each about 3,000 miles (5,000 km) in diameter, which are fixed at the boundary with the Earth's core. The researchers speculate that these two superblobs, which lie beneath Africa and the Pacific Ocean, have been stationary for 250 million years.