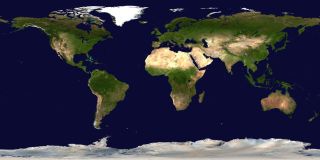 The continents may have first risen high above the oceans of the world about 3 billion years ago, researchers say. That's about a billion years earlier than geoscientists had suspected for the emergence of a good chunk of the continents.

Earth is the only known planet whose surface is divided into continents and oceans. Currently, the continents rise an average of about 2.5 miles (4 kilometers) above the seafloor.

The continents are composed of a thick, buoyant crust that's about 21 miles (35 km) deep, on average, whereas the comparatively thin, dense crust of the ocean floor is only an average of about 4 miles (7 km) thick. Because the continents are so thick and buoyant, they are less likely to get dragged downward. That's why so many ancient continental rocks have survived in the Earth's crust. Still, much about the earliest days of continents, and when and how they formed, remains hotly contested. [Photo Timeline: How the Earth Formed]

"Earth's surface is continually being reworked by tectonics and agents of erosion, so what may have formed long ago may no longer be present," said geologist Cin-Ty Lee at Rice University in Houston, who was not involved in the current study.

To shed light on the origins of continents, isotope geochemist Bruno Dhuime at the University of Bristol in England and his colleagues analyzed more than 13,000 samples of rocks from the continental crust. Some of these samples were more than 4 billion years old.

Prior research suggested the first 2 billion years of Earth's 4.5-billion-year history were dominated by volcanic activity that generated the kind of crust now seen on the seafloor. Continentlike crust, which is thick and rich in silica, was thought to only have emerged in great volumes in the past 2 billion years. Determining what the earliest continental crust was like and when it formed can be tricky, because Earth's crust has melted and mixed together over and over again.

The researchers found that when magma cools and crystallizes, the remaining molten rock becomes enriched in silica and rubidium, but less so in strontium. The relative amounts of rubidium and strontium are therefore linked with the amount of silica in rock, and so could be used to extrapolate when in the modern era thick, silica-rich continental crust emerged.

The researchers found that modern, silica-rich continental crust first appeared about 3 billion years ago. The thick, buoyant nature of these chunks of crust would have made them rise high above what became the seafloor, Dhuime and his colleagues note online June 22 in the journal Nature Geoscience.

"They are showing when continents actually emerged from the oceans," said Lee, who wrote an accompanying news article in Nature Geoscience. "Continents certainly existed early in Earth's history, but perhaps many were submerged."

It remains uncertain why continental crust made its first appearance about 3 billion years ago. One possibility is the onset of plate tectonics — when the plates of rock making up the planet's exterior began moving slowly over the Earth's mantle layer. Plate tectonics would have resulted in wet rock getting shoved down into Earth's interior, eventually helping to form silica-rich magmas that make up much of the continental crust.