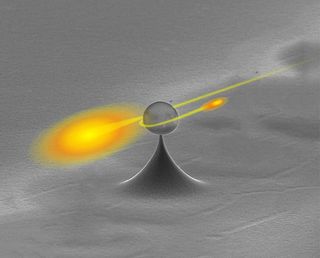 Scientists say capturing a single photon from a pulse of light could help in the development of future quantum communications systems.
(Image: © Weizmann Institute of Science)

A novel method for "plucking" individual particles of light out of a laser pulse could lead to major breakthroughs in quantum computing, researchers say.

Using a combination of supercooled atoms and cutting-edge optical technology, physicists from the Weizmann Institute of Science in Israel were able to extract a single photon from a beam of light.

Individual photons are of great interest to physicists because they are governed by the laws of quantum mechanics rather than the rules of classical physics (which normally apply to light). Many scientists also see photons as a promising candidate to carry information in future quantum computing systems. [Wacky Physics: The Coolest Little Particles in Nature]

"Light composed of photons is already the best carrier of information we have," said Barak Dayan, a senior scientist at the Weizmann Institute of Science, whose lab developed the new method. "But once we move into quantum technologies, we are going to have to use single photons as the carriers of information, so being able to control single photons will be crucial."

In a previous study published in the journal Science in 2014, the researchers showed how the method could be used to create an all-optical router for quantum communication systems. They created a switch to send single photons down different pathways and encode them with quantum information, with the position of the switch determined by its interaction with the photons.

A key benefit of quantum communication is that it is ultrasecure, because the process of measuring any quantum system generally disturbs it, the researchers said. This would normally alert the operator to any eavesdroppers, but according to Dayan, the solution they devised could be used to spy on certain systems.

At present, most single-photon sources are imperfect and occasionally produce more than one photon. "One of the worries is that someone smart could make sure that, if there's one photon, their device doesn't do anything, but if there are two photons, it intercepts the spare one," Dayan said.

This is known as the "photon number splitting attack," and it could be used to decode messages without the interception (of the particle) being detected. Alternatively, operators could use the approach to purify their transmissions by removing extra photons, Dayan said.

Researchers have removed single photons from a beam of light before, in a process called photon subtraction that uses low-reflectivity beam splitters to divert the particles.

But the method is probabilistic, meaning it is hit-or-miss whether a photon will be removed with each pulse of light. In addition, the only way to determine whether the process was a success is to use a photon detector, which absorbs the particle and means it can't be used for anything else. [The 9 Biggest Unsolved Mysteries in Physics]

"In our case, there are two advantages," Dayan told Live Science. "One: In principle, it always happens — it's deterministic. Two: You're not losing the photon, just diverting it, and you can use it for other processes."

The solution uses a single rubidium atom held in place by lasers that cool it to near absolute zero. (Absolute zero equates to minus 273.15 degrees Celsius, or 459.76 degrees Fahrenheit.) Coupled to this is a micro optical resonator — effectively, a 30-micron-wide sphere of glass (for perspective, an average strand of human hair is about 100 microns wide) used to confine light long enough for individual photons to interact with the atom. Light is fed into the resonator using a nanoscale fiber-optic cable.

The researchers rely on a physical effect they call "single-photon Raman interaction," or SPRINT. This causes the atom to block the transmission of light until a single photon is reflected, at which point, it becomes transparent to the remaining photons.

Unlike previous methods of photon subtraction, the SPRINT effect, by its very nature, always removes a single photon from an incoming beam, the scientists said. And though the researchers currently send the extracted photons toward a detector to confirm their findings, the particles of light could be diverted elsewhere, they added.

But Dayan is keen to stress that, for now, his team's work is designed to demonstrate the SPRINT effect, rather than to build a practical quantum communication device. "The realization is very complex — there's a reason no one has done this before," he said. "It combines several technologies, and that combination is very challenging. That's why it has taken us years to build this lab and this experimental setup."

The use of supercooled atoms is beyond the scope of commercial systems, but Dayan said researchers are working on a number of technologies designed to mimic the unique properties of atoms, including quantum dots, which are tiny semiconductors that exhibit interesting quantum effects, such as being able to absorb light from one wavelength and convert it to highly saturated light at a different wavelength.

"Once one of these technologies matures, that effect we have demonstrated will be applicable there as well," Dayan said.

The new study was published online Nov. 23 in the journal Nature Photonics.