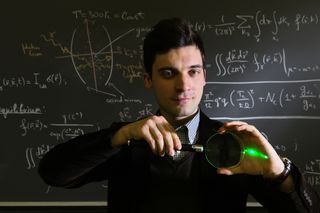 Alex Kruchkov, of the Swiss Federal Institute of Technology, demonstrates how light can be trapped inside a system, for example in a glass lens.
(Image: © Alain Herzog/EPFL)

A theoretical physicist has explained a way to capture particles of light called photons, even at room temperature, a feat thought only possible at bone-chillingly cold temperatures.

Alex Kruchkov, a doctoral student at the Swiss Federal Institute of Technology (EPFL), has built the first quantitative mathematical model for trapping and condensing light under realistic conditions.

Light consists of tiny quantum particles called photons. One of the most spectacular properties of quantum particles is that they can condense or lose their individual identity and behave like clones of each other, becoming a single gigantic wave called a Bose-Einsteincondensate (BEC). [Wacky Physics: The Coolest Little Particles in Nature]

Usually, it happens at extremely low temperatures — less than a micro-kelvin, or a millionth of a degree above absolute zero. But "one of the most exciting things about the BEC of light is that it happens at room temperature," said Henrik Ronnow of EPFL, who didn't take part in the study.

If scientists could create this wave using photons, it could have significant applications in laser and solar panel technology.

Although Albert Einstein predicted BEC for massive particles in 1924, for a long time scientists considered it impossible to create a BEC made of light, because photons have no mass, which is a key requirement for a Bose-Einstein condensate.

'Light at the end of the tunnel'

In 2010, four physicists from Bonn University in Germany turned this assumption on its head. The scientists —Jan Klaers, Julian Schmitt, Frank Vewinger and Martin Weitz — successfully condensed photons in a micro-cavity made of two mirror surfaces positioned close to one another. A photon trapped in such a cavity behaves as if it had mass; in other words, the cavity creates a "trapping potential," keeping the photons from escaping.

However, to verify a scientific finding, it must be possible for others to reproduce the experiment. Four years after the 2010 success, though, no one has yet been able to do so for the micro-cavity results, said Kruchkov.

"Understanding of the condensation of photons was like the light at the end of the tunnel. Experimentalists were waiting for some simple but effective model, containing 'a recipe' to 'cook' light condensates," he said.

So Kruchkov created a recipe. Using mathematics and building on previous models, the physicist developed a theoretical model for condensing light in three-dimensional space and under realistic conditions.

"Additionally, I showed that the energy of light can be accumulated in the condensed state of photons," he said.

The researcher says his model of photon condensation explains experimental measurements very nicely — showing that photons can indeed be captured in a Bose-Einstein condensate state, and at room temperature and pressure.

"Now, it is actually possible to predict the behavior of the system for other experimental conditions. It also explains the temperature reaction of the experimental setup," he said. "I show all the stages of the process that one needs to know to reproduce these experiments.

"So in principle, if you know how to deal with a laser without hurting yourself, you can conduct the experiments even in your backyard," he added.

Physicist SergiyKatrych, also at the EPFL but not involved in the study,said the research was important primarily because a Bose-Einstein condensate of photons would represent a totally new state of light. "In some sense, the BEC of light is a bridge between light and matter — the bridge unknown before."

A paper detailing Kruchkov's research appears in the journal Physical Review A.