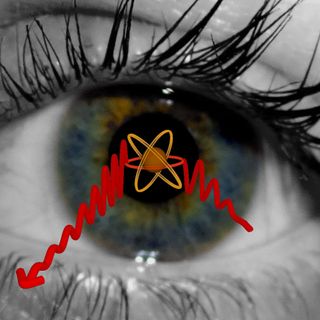 Scientists have used a single atom trapped in an optical resonator to detect the presence of a reflected photon without destroying that packet of light.
(Image: © MPQ, Quantum Dynamics Division.)

If you want to see a packet of light called a photon, you have to destroy it. Any device that picks up on the presence of light has to absorb its energy, and with it, the photons. At least, that was what scientists thought until now.

At the Max Planck Institute of Quantum Optics in Germany, researchers found a way to detect single, visible-light photons without "touching" them and losing the photons themselves.

The work, detailed in the Nov. 14 issue of the journal Science Express, has important implications for quantum computing devices and communications. In an ordinary computer the presence of electrons — current — encodes the bits in logic circuits. Being able to keep photons around while still detecting them means photons could be used in a similar way. [Wacky Physics: The Coolest Little Particles in Nature]

"We could build gates between photons and atoms," Stephan Ritter, physicist and co-author of the study, told LiveScience. In any computer gates are the building blocks of logic circuits, which control functions such as AND, OR and NOT in a computer's brain.

Others have detected photons without destroying them, the most notable being Serge Haroche at the Collège de France in Paris, who won a Nobel Prize in 2012 for the achievement. However, he detected photons comprising microwave wavelengths of light. The Max Planck team detected visible-light photons, which are more useful for quantum communications.

To see the photons, Ritter and his colleagues, Andreas Reiserer and Gerhard Rempe, trapped a single atom of rubidium in a cavity, just a half-millimeter across, with mirrors on the sides. The atom was in two states. In one, it is in resonance, or "coupled," with the cavity — one can think of them as vibrating in time with each other. In the other state it isn't — the atom is "out of tune" with both the cavity and the incoming photon. Atoms and subatomic particles are governed by the rules of quantum mechanics, which allowed the rubidium atom to be in both states at once.

They then fired laser pulses that, on average, had less than a single photon in them. When the photon reached the cavity, it would either continue inside and get reflected straight back or it would just bounce off the cavity, never entering — which happened if the atom was coupled to the cavity. The key is that there is a difference in the state of the atom after each outcome. They confirmed that the photon had reflected from the cavity a second time with an ordinary detector.

The photon didn't interact with the atom directly, but it did alter the atom's phase — the timing of its resonance with the cavity. The scientists could use the difference between the superposition state — when the atom is in two states at once — and the atom's measured phase to calculate whether or not the photon entered the cavity. In that way they "saw" the photon without destroying it, without touching it.

Not "touching" the photon also means that certain quantum properties are never observed, preserving them. An unobserved photon can be in a "superposition" state — any one of its quantum properties, called degrees of freedom, can have more than one value simultaneously. Observing the photon forces it to be one or the other. For example, if a photon is polarized either horizontally or vertically, it's impossible to know which one until the photon is observed. In quantum mechanics that means the photon can be in both states, until it is measured and takes on a definite value. [How Quantum Entanglement Works (Infographic)]

This ability matters for quantum computing devices. Quantum computers are powerful because the bits in them, called qubits, can be both 1 and 0 at the same time, whereas an ordinary computer has to have its bits set at 1 or 0 sequentially. Essentially, a quantum computer can be in many states simultaneously, speeding up calculations such as factoring prime numbers.

If a photon is encoding the qubit, observing that photon directly would spoil its superposition state, and, thus, its ability to function as a qubit. But one might need to detect that the photon reached a certain place in the network. "Let's say you encode the qubit into the polarization," Ritter said. "The detection of the presence of a photon tells you nothing about its polarization."

By measuring the photon's state indirectly, however, it's possible to see the photon without destroying the quantum state (or the photon), and use different quantum states — such as polarization — to store qubits.

Going forward, Ritter says his group plans to work on boosting the efficiency of the detection – so far they can detect about 74 percent of the photons released. Stringing several detectors together would improve that — and one would end up with a detector that could pick up single photons better than those currently available.