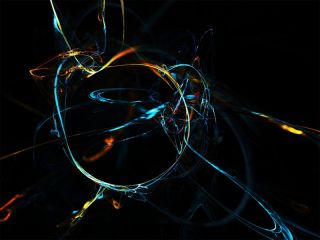 Physicists have found that particles of light, or photons, may live for at least 1 quintillion years, and if they can die, photons may give off very light particles that could travel faster than light.
(Image: © Robert Spriggs | Shutterstock)

The particles that make up light, photons, may live for at least 1 quintillion (1 billion multiplied by 1 billion) years, new research suggests.

If photons can die, they could give off particles that travel faster than light.

Many particles in nature decay over time. For instance, radioactive atoms are unstable, eventually breaking down into smaller particles and giving off energy as they do so.

Scientists generally assume photons do not break down, since they are thought to lack any mass with which to decay. However, while all measurements of photons currently suggest they have no mass, they might instead potentially have masses too small for current instruments to measure. [10 Implications of Faster-Than-Light Travel]

"How much do we actually know about photons?" asked particle physicist Julian Heeck at the Max Planck Institute for Nuclear Physics at Heidelberg, Germany. "They led to several revolutions in science, but their properties are still a puzzle."

Based on the Standard Model of particle physics, which governs the realm of the very tiny, Heeck calculated that photons in the visible spectrum would live for at least 1 quintillion years.

The extraordinarily long lifetime Heeck calculated is an average. "There is the possibility that some photons — very few, though — have decayed," he said. (The universe is currently about 13.7 billion years old.) Scientific projects such as the Planck mission, aimed at measuring the afterglow of the Big Bang, could potentially detect signs of such decay, Heeck noted.

If photons do break down, the results of such decay must be even lighter particles, ones that would travel even faster than photons. Assuming photons have mass, "there is only one particle we know from the Standard Model of particle physics that might be even lighter — the lightest of the three neutrinos," Heeck said.

Neutrinos are ghostly particles that only very rarely interact with normal matter. Countless neutrinos rush through everyone on Earth every day with no effect.

"It might well be that the neutrino is lighter than the photon," Heeck said. In principle, each photon might decay into two of the lightest neutrinos.

"The lightest neutrino, being lighter than light, would then actually travel faster than photons," Heeck said.

Intriguingly, the speed that photons travel at means their extraordinary life spans will pass by quickly from their perspective. Einstein's theory of relativity suggests when particles travel extraordinarily quickly, the fabric of space and time warps around them, meaning they experience time as passing more slowly than objects moving relatively slowly. This means that if photons live for 1 quintillion years, from their perspective, they will only live about three years.