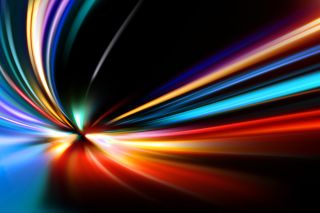 A universal rule of thumb may need to be rewritten: Light moving freely through empty space does not necessarily travel at the speed of light.

As physicists have come to know, light particles traveling through empty space should zip along at exactly 186,282 miles per second (299,792 kilometers per second). This velocity is what's usually referred to as "the speed of light".

Light naturally travels more slowly when it passes through a medium like water or glass, or artificial structures called waveguides. But once the light exits through the other side of the medium, it should immediately ramp back up to its maximum clip. But now, new research suggests there is an exception to this rule: Light will not travel at top speed in empty space if the "structure" of the light is first changed. [Twisted Physics: 7 Mind-Blowing Findings]

Something as simple as a magnifying glass can change the structure of light, according to the authors of the new study. The lens collects the diffuse light and brings it together into a single, bright point. In their experiments, the researchers were able to isolate this slowing effect by sending the light through specially designed "masks" that are similar to certain types of lenses.

The researchers emphasize that although the results seem strange at first, they do not defy the laws of physics.

"It makes perfect sense — it's perfectly consistent with our understanding of how light works, and how waves work and how quantum mechanics works," said Daniel Giovannini, a research assistant at the University of Glasgow in Scotland and co-author of the new paper.

While hints of this phenomenon have been reported previously, the researchers said their work is the first to demonstrate it directly and offer a full explanation for why it happens.

"It's like a bar bet," Giovannini said. "You say, 'I'm betting you that I can slow down light in free space.' And everyone else is going to be like, 'No, you can't do that.' And when you actually do it, everyone is like, 'Oh, that was obvious.'"

For photons, or particles of light, getting out of a glass of water is like trying to leave a crowded party: The photon keeps bumping into other "partygoers" (the water molecules), preventing the little light ray from taking a straight path to the door. The photon moves quickly between each water molecule, but a zigzag path between two points is slower than a straight one, so ultimately, the photon is delayed.

While traveling through the medium, the photons are always moving at their maximum velocity (the speed of light), but are slowed down by the altered path. So, once the photon escapes into open space and resumes a straight path, it should also jump back up to its maximum speed. But according to the new study, changing the structure of the light can effectively keep the photon traveling on a zigzag path, and slow it down. [9 Biggest Unsolved Mysteries in Physics]

A special type of lens can create what's known as a Bessel beam, which is a beam of light shaped into a bull's-eye pattern. Scientists doing experiments with these Bessel beams — as well as something called a Gaussian beam, which is a point of light that is densest in the middle and gradually thins-out toward the edges — have noted that the light seemed to move more slowly than it should in free space.

Lenses can affect light rays in different ways, so to remove those extra effects, the researchers used specialized "masks" — basically a very thin film made up of crystal structures — that can shape the path of individual photons.

A photon is a unit of light that cannot be broken up into smaller pieces. However, a light wave technically has multiple components, the researchers said. It's similar to how a geographic location can have a latitude, a longitude and even an altitude: The three different numbers all describe a single location. Similarly, a single photon can be described by multiple wave components.

When the wave of light passes through the mask, its components are sent on different paths; some travel straight ahead, while others are sent on slower, angled paths that slow them down. The speed of the photon is the average speed of all the wave components, so the entire photon gets slowed down by those diverted components.

Structures called waveguides can create this same slowing effect, but normally, the light must be passing through the waveguide to be slowed down.

"If you send light down a waveguide, it will be bouncing off the walls and traveling in a zigzag," Giovannini told Live Science. "What we're doing here is creating more or less the same structure, except in free space and not in a waveguide. We remove the walls, and we just let light propagate in free space after we've structured it."

"The delay we've introduced to the structured beam is small, measured at several micrometers [a millionth of a meter] over a propagation distance of 1 meter, but it is significant," Giovannini said in a statement. The researchers said this delay can be seen in both groups of photons and individual photons.

Previously, researchers toying around with some special types of lenses found that light exiting these lenses appeared to travel a little more slowly than the speed of light. However, this is the first time this effect has been isolated and studied directly, the researchers said. The researcher's explanation involving the "zig-zag" path and the structure of the light is the first complete theoretical explanation for this phenomenon.

The results don't have any immediate applications, the researchers said, but the findings may be important in precision measurements involving light.

"It's just a really neat effect that basically no one had paid much attention to before," Giovannini said.