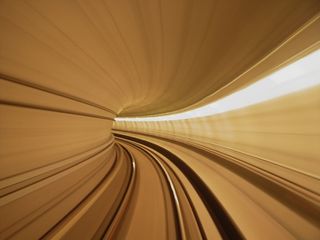 Einstein's theory of special relativity sets of the speed of light, 186,000 miles per second (300 million meters per second), as a cosmic speed limit. Some researchers think they may have broken this limit, and the implications are mind bending.
(Image: © Willem Dijkstra, Shutterstock)

When physicists announced last week that they had detected subatomic particles, called neutrinos, that appeared to be traveling faster than the speed of light, it seemed to be an exception to a cosmic speed limit set by Albert Einstein's special theory of relativity.

Einstein's theory, which he proposed in 1905, describes the relativity of motion, particularly the motion of anything moving at or close to the speed of light. At the time, people believed that light waves, just as sound waves, ocean waves or shock waves, had to travel through a medium. But rather than air, water or ground, they believed light waves traveled through a substance called ether, less tangible than air, that pervaded the universe.

Scientists assumed that the laws of physics would be different for an object at rest with respect to the ether, and with the proper experiments it would be possible to figure out what was truly at rest, according to Peter Galison, a professor of physics and the history of science at Harvard University. [Twisted Physics: 7 Mind-Blowing Findings]

"Einstein got rid of that," Galison said. "There are no physical properties that go with the statement 'I am truly at rest.' That's really what special relativity is about."

In other words, the properties of physics are the same for me whether I am riding my bicycle or sitting on a park bench. Special relativity, however, does not apply to acceleration. Einstein would tackle this later in his general theory of relativity.

Special relativity is also based on a second assumption that gives the speed of light — 186,000 miles per second (300 million meters per second) — in a vacuum a special status. Einstein postulated that light always travels at the same speed for every observer, regardless of that observer's speed, Galison explained.

So, if you have a fast enough car, in theory, you could catch up to a bullet. But you could never catch up to, or even reduce the apparent speed of a pulse of light, regardless of whether you were driving toward it or away from it.

Some experiments have appeared to play with the speed of light, but these effects are illusory, according to Galison. Light traveling through different mediums, such as chilled sodium gas, does slow substantially, but this is because the light is being bounced between the atoms within the medium. But between interactions with atoms, it is still traveling at 186,000 miles per second (300 million meters per second), he said.

Claims that it's possible to push light beyond 186,000 miles per second (300 million meters per second), are equally illusory, Galison said.

"For 100 years, people have used these and more sophisticated paradoxes to try to say, 'Well isn't there this way to exceed the speed of light?'" Galison said. "They usually turn out to involve accelerating motion, something that is not really an object" — like the bright spot of the laser pointer — "or infinite energy." In other words, cheats.

In the lab, researchers can create the impression of sending light faster than the speed limit by tweaking the speed at which the wave crests of light propagate through space. This, however, does not increase the speed at which the actual electromagnetic information travels — this is conveyed by the overall shape of the wave's amplitude.

Since Einstein introduced special relativity, the theory and the special status it gives to the speed of light have appeared iron-clad.

Until now, that is. Scientists working on the OPERA experiment at the CERN laboratory in Switzerland beamed neutrinos 454 miles (730 kilometers) underground to Italy, and calculated how fast they made the trip. Shockingly, the neutrinos appeared to beat light speed by 60 billionths of a second. The finding appears to fly in the face of the last 106 years of physics.

"Our understanding hasn't evolved at all, we've been doing extremely precise tests of special relativity since the very first days," said Ben Monreal, an assistant professor of physics at University of California, Santa Barbara. "Special relativity has been passing tests with flying colors for over 100 years now. That is why this result is so surprising and unexpected."

If the finding of the OPERA experiment does pan out, the implications are much more mind-bending. Under special relativity, if something travels faster than the speed of light, it goes backwards in time. Such a proposition could interfere with the basic rule that cause precedes effect, called causality.

"The reason a lot of physicists are very unmoved by these claims is that it could make causality itself very problematic," Galison said. In other words, it raises the prospect of time travel.

There is another issue too. Einstein introduced the speed of light as a mathematical constant, c. If neutrinos can indeed exceed the speed of light, then c loses its special status, giving rise to a host of other problems elsewhere in physics, where c has been used in calculations, such as the famous formula E=mc^2. [Warped Physics: 10 Effects of Faster-Than-Light Discovery]

"For all of these reasons, people are going to need extra evidence to conclude that it is going to hold up," Galison said.