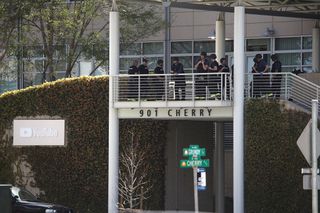 Police officers are seen in front of the YouTube headquarters in San Bruno, California, on April 3, 2018, where they were investigating a mass shooting.
(Image: © Justin Sullivan/Getty Images)

Police rushed to YouTube headquarters in San Bruno, California, this afternoon (April 3), after reports of an active shooter there. Police said they arrived to a "very chaotic scene" as employees fled the building.

The shooter is reportedly dead from a self-inflicted wound, and four victims are being treated at a nearby hospital, according to news reports.

Though mass shootings seem less likely to evoke shock and awe these days — with 2018 having several such shootings logged already, according to an online tracker — there is one surprising aspect of the YouTube shooting: The shooter was a "she."

That's shocking, according to experts in human behavior, because women are violent at much lower rates than men. And mass killings, even more so than other types of violence, are overwhelmingly a male phenomenon.

Female mass killers are "so rare that it just hasn't been studied," said James Garbarino, a psychologist at Loyola University Chicago who has researched human development and violence. "There aren't enough cases," said Garbarino, who spoke to Live Science in 2015 after a mass shooting in San Bernardino, California, which involved a female shooter.  [The History of Human Aggression]

In general, women are far less homicidal than men. Women commit only about 10 percent to 13 percent of homicides in the United States, said Adam Lankford, a criminal justice professor and author of "The Myth of Martyrdom: What Really Drives Suicide Bombers, Rampage Shooters, and Other Self-Destructive Killers" (St. Martin's Press, 2013).

When women do kill, they're less likely than men to choose firearms to do it, Lankford told Live Science. Only 8 percent of perpetrators of firearm homicides are female, he said. In comparison, 40 percent of poisonings and 20 percent of deaths by fire are linked to female perps. [10 Surprising Facts About the Male Mind]

Details are still fuzzy as to the YouTube's shooter's motive and exactly how the incident unfolded, though sources reportedly told the Bay Area news station KRON4 that the shooter killed her boyfriend.

In the case of the female shooter at the Inland Regional Center in San Bernardino on Dec. 2, 2015, she stood out for her sadism, as well, said Mary Ellen O'Toole, a retired FBI profiler and author of "Dangerous Instincts: How Gut Feelings Betray Us" (Plume; Reprint edition, 2012). In that incident, a man and woman opened fire on a holiday party, leaving 14 dead and 21 wounded. The duo died in a shootout with police.

Female suicide bombers aren't unheard of, O'Toole told Live Science, but blowing oneself up is a very passive form of violence. Shooting into a room full of innocent people as they cower in fear "is very sadistic," O'Toole said. "And sadistic violence like this is almost exclusively male."

Most men, of course, go through life without killing anyone. And motives for crime are very individual; not all women and men who kill do so for the same reasons. Each case is unique, experts stress. But something in the combination of male biology and socialization makes men more prone to violence. Notably, the gender gap in violence is found in almost every culture around the world, Garbarino said.

There are no simple answers. The easiest theory to digest is probably an evolutionary one: Males, over hundreds of thousands of years of development, have historically been rewarded for aggression. A tendency toward violence is seen in chimpanzees, humans' closest living primate relative. (Bonobos, humanity's other close primate family member, are far more peaceful, though recent research has shown they are drawn to jerks.) Violence can beget status for males, both in chimps and in humans (just look at how many action heroes get the girl). And for males, a lack of status can mean missing out on the chance to mate.

Indeed, sexual frustration is a theme running through the writings of many male mass shooters, Lankford said. Many shooters leave manifestos explicitly detailing their hatred of women and of men who seemed to navigate relationships with women with ease.

"By contrast, I'm not aware of any female attackers, even though we have a small sample, I don't know that any of them complained about not being able to have sex," Lankford said.

Status plays a large role in school shootings, a particularly male phenomenon, said Katherine Newman, a sociologist at the University of Massachusetts, Amherst. Newman, author of "Rampage: The Social Roots of School Shootings" (Basic Books, 2005), argues that there has never been a typical school shooting with a female perpetrator. A case in San Diego in 1979 involved a teenage girl who lived across from an elementary school and started shooting children and staff from her home one morning. But in cases of random shootings on school grounds by a person who is part of that school's community, the perpetrators are all male, Newman told Live Science.

These boys and young men may be responding to a cultural script that equates violence with masculinity, Newman said. Most are not loners. Instead, they try to join social groups but struggle. Their experience is one of disappointment and humiliation. So, they decide to trade in their "loser" persona for something more appealing, according to Newman.

"Sadly for all of us, that something more appealing is the role of the antihero," Newman said.

Girls aren't similarly targeted with the notion that becoming a violent antihero is appealing, Newman said. Their reputational struggles play out in other ways, usually involving self-harm or nasty gossip.

The gap in aggression between girls and boys has narrowed, though, said Garbarino, author of "See Jane Hit: Why Girls Are Growing More Violent and What We Can Do About It" (The Penguin Press HC, 2006). More popular media show girls and women acting in violent ways, which provides role models for female aggression, he said.

Still, the gender gap in lethal violence hasn't shrunk like the gap in general violence, Garbarino said. It's a mystery as to why. Men may be biologically vulnerable: Variations in a gene called MAOA combined with early developmental stressors like abuse or drug use can raise a man's risk of criminality. Men are also more likely than women to base moral decisions on abstract principles rather than on empathy, Garbarino said.

"Whatever the culture offers in the way of justification of righteous violence, males are more likely to implement that," he said.

As more details came to light in the San Bernardino case, it became apparent that the two shooters, who were parents of a 6-month-old infant, probably thought their violence was righteous. The FBI investigated the case as an act of terrorism, making the shooting different from many mass shootings in the United States. A 55-page report on the shooting released last year revealed the couple shot about 80 rounds of ammunition, and were shot by police more than 40 times together, according to Fox News.

Rather than working in tandem like the San Bernardino couple, shootings like this tend to be carried out solo, as the YouTube mass shooting seems to have unfolded. In fact, the solo mass shooter is typically suicidal and wants to take others out with him, Lankford said. But when two attackers are involved, typically only one is conventionally suicidal, and the other "comes along," he said. [Understanding the 10 Most Destructive Human Behaviors]

Even so, there are some similarities to the self-destructive impulses of terrorists and rampage killers. Sexual frustration may play a role for many male terrorists as it does for male mass shooters, particularly those from strict religious traditions. Friends and family of the 9/11 hijacker Mohamed Atta recalled him as extremely shy and repressed around women, for example. The Internet posts of Umar Farouk Abdulmutallab, the "Underwear Bomber," who attempted to blow up a flight on route to Detroit in 2009, revealed a young man who struggled to tamp down his sexual urges in favor of jihad.

In some cultures, including fundamentalist Islam, martyrdom may also act as a "loophole" in prohibitions against suicide, Lankford said. It's unclear if either San Bernardino shooter was conventionally suicidal, he said, but court filings from the divorce of the male shooter's parents claim that his father was abusive and threatened suicide in front of his children. A familial history of mental health problems and suicide attempts is a risk factor for suicidal urges.

"I wouldn't dismiss the idea that some sort of mental health problems or suicidal tendencies could be at play in this case," Lankford said.

Culture interacts with mental illness in surprising ways. For example, researchers reporting in a 2014 article in the British Journal of Psychiatry found that 70 percent of Americans with psychoses who heard voices reported that the voices urged them toward violence. In India, that number was 20 percent, and in Ghana, only 10 percent.

"People who we think of as being 'crazy,' how do they absorb the larger cultural messages and scripts that are out there?" Garbarino said.

Whether the woman had been planning this attack is unknown. But, O'Toole told Live Science previously that shooters don't "just snap." For instance, the San Bernardino killers had likely been planning their attack for years, investigators found. Chillingly, many people are very good at mimicking normalcy as they go about their deadly preparations, O'Toole said. The trappings of a happy family life — a marriage, a new baby — could have been, in part, props to maintain that illusion, she said.

"This is a cold-blooded woman, and I can't tell you how many cases I worked in the FBI where parents killed their own kids," O'Toole said in 2015. "We're not dealing with a typical woman full of compassion and undying love for her child."