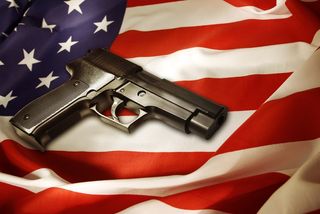 A strange paradox is emerging in America: Overall violent-crime rates are down, but active shooter events — in which a person is trying to kill multiple people in a populated area — appear to be on the rise, according to Federal Bureau of Investigation statistics.

Meanwhile, a just-released study finds that although the United States has just about 5 percent of the world's population, the country has 31 percent of the world's mass shooters. The reasons for these numbers are complex, researchers say, but the data suggest that the availability of guns, and perhaps the American obsession with fame, may be to blame.

The United States has more private gun ownership and more desire for fame than any other country in the world, said Adam Lankford, a criminal justice professor at the University of Alabama and author of the new research, presented Sunday (Aug. 23) at the annual meeting of the American Sociological Association. [5 Milestones in Gun Control History]

The possible association between mass shootings and a desire for fame is particularly eerie, given the nation's latest high-profile killing. Early this morning (Aug. 26), a former employee at a local news station in Virginia allegedly killed a reporter and a cameraman on-air, while filming the shooting with a GoPro camera. He later posted the film to social media. Because there were fewer than four victims, the event does not qualify as a mass shooting, according to most definitions. But the apparent desire to broadcast the crime places the killer in the same company as many notorious mass shooters of the past decade. [The History of Human Aggression]

"Especially some of the younger ones — they want attention," said Mary Muscari, a forensic nurse at Binghamton University in New York who has studied revenge-driven mass killers. "That's why you see them wanting to have a bigger head count, a bigger body count, to try to outdo the last one or to do something that is going to cause more of a rise."

A person claiming to be the alleged gunman in the Virginia attack sent a 23-page fax to ABC News after the shooting, claiming to be influenced by Seung-Hui Cho, the killer in the Virginia Tech shooting of 2007. "He got NEARLY double the amount that Eric Harris and Dylann [sic] Klebold [the Columbine shooters] got," the writer of the fax added, according to ABC News. The fax also claimed that the shooting was in response to the mass killing at a Charleston church in June.

The paradox of mass shootings

There are no official definitions of a mass shooting, and varying ways of tracking the data — by fatalities, by total victims — can make finding trends in this type of violence difficult. A person who arms himself with enough ammo to take out dozens but who only manages to kill one or two people would not be included in federal statistics that track crimes with four or more victims.

The term "mass shooting" also encompasses a range of crimes with a variety of motivations. A gang drive-by that kills multiple people would count, though the root cause is very different from the kind of rampage killings that occur regularly in schools, churches and theaters around the country.

The FBI attempted to narrow the definition in a 2014 report that focused on "active shooter" situations, defined as shootings in which an individual tried to kill people in a public place, and excluding gang- or drug-related violence. The agency found that 160 active-shooter incidents had occurred between 2000 and 2013, and that the number of events was rising. In the first seven years of the period, the average number of active-shooter incidents per year was 6.4. In the final seven years, the annual average rose to 16.4.

In these 160 shootings, 486 people were killed and 557 were wounded, not including the shooters.

The rise in active-shooter events bucks the general trend toward less violent crime in the United States: Overall violent crime dropped 14.5 percent between 2004 and 2013, according to the FBI.

This disconnect echoes what Lankford found in his latest research. Lankford analyzed mass-shooting events in which four or more people were killed in 171 countries, between 1966 and 2012. He found that the rate of mass shootings did not correlate with the overall homicide rate.

"Being a dangerous country or a so-called peaceful country was not a predictor" of mass shootings, Lankford told Live Science.

The link to guns

"That wasn't a shocking finding, but I guess what surprised me was it showed up no matter how many or what type of statistical tests I ran," Lankford said. "It was kind of unshakable."

The link between firearm ownership and mass shootings remained even when the United States was removed from the analysis, Lankford said. For example, Switzerland and Finland, two relatively low-crime countries with high rates of personal gun ownership, had more mass shootings than would otherwise be expected.

Lankford also found that mass shootings in the United States tended to take place at schools, businesses or workplaces, whereas international mass shootings were most common at military installations.

"Looking back, it maybe makes sense, because that's where people have the easiest access to firearms in other countries," he said.

Discussions of firearm access usually lead to arguments about gun-control laws. But there may be another way, said Michael Siegel, a physician at the Boston University School of Public Health who researches gun violence. Like smoking-related diseases, gun deaths are a public health problem, Siegel told Live Science. And like cigarettes, guns could be susceptible to the same sort of cultural change that has banished smokers to outdoor alcoves and sent smoking rates plummeting.

"There may be ways that we can actually intervene and try to change the gun culture itself," Siegel said.

Attitudes toward guns have already shifted, he said. There was a time when guns were thought of primarily as tools for hunting and recreation. Increasingly, however, the conversation has shifted to gun use for defense, to "stand your ground" laws and to the right to carry guns openly in public.

"That's a change in social norms that has occurred," Siegel said. Public health campaigns could seek to push back, encouraging people to think of guns as recreational, not as something meant to be used against one another, he said.

Gun ownership can't be the entire story, though, given that overall violent crime is decreasing. There seems to be something that sets mass shootings apart.

One possibility is the American preoccupation with fame. Studies have found that Americans are more interested in fame than people of other nationalities are. A 2007 Pew Research survey of 18- to 25-year-olds found that about half said that getting famous was a top priority for their peers. Television shows increasingly promote fame as a value, research has found, and pop lyrics are becoming more narcissistic. A 2010 review of research studies found that modern college students display less empathy than students of the late 1970s. These studies fit a general pattern of research showing that narcissism is on the rise.

Simultaneously, Lankford said, the line between being famous and infamous is blurring. Scientists looked at the covers of People magazine issues dating from 1974 to 1998, and found that cover stars were increasingly featured for bad behavior — cheating, arrests, crime — rather than good acts (though there was a slight shift toward positivity after the Sept. 11 terrorist attacks), according to their 2005 report.

"There is a 'fame at any cost' mentality," he said. And many mass killers explicitly cite fame as their motivation: A quick Google search for "wanted to top Columbine" reveals multiple news articles about killers or would-be killers mentioning the 1999 school shooting as their inspiration.

"We know that a lot of public mass shooters, particularly when they're young, have admitted that they really want to be famous, and that killing is how they're going to do it," Lankford said.

Of course, many mass shooters end up killing themselves or being killed by law enforcement before they see the publicity related to their crime. Some are suicidal and want to take others out with them, Muscari said. Others don't care or don't seem to comprehend what death will mean.

"We see, sometimes, with adolescents — they envision themselves committing suicide but actually seeing themselves at their funeral or wake," Muscari said. "They don't connect 'dead' and 'being dead.'"

Absent a sudden shift in gun policy, decreasing the notoriety of mass killers may be the best defense. Media reports should focus on the victims and not name the killers, Muscari said.

"Don't give them their fame," she said.