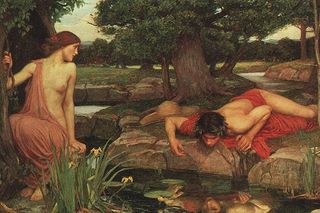 In Greek mythology, Narcissus was a beautiful and beloved youth who loved none but himself. He wasted away staring at his reflection in the surface of a pond. According to multiple new studies, more and more of today's youths are developing the rather unattractive quality exhibited by Narcissus in the fable. Narcissism, research shows, is on the rise.

The first piece of evidence comes from psychologists Keith Campbell of the University of Georgia and Jean Twenge of San Diego State University. For a book called "The Narcissism Epidemic" (Free Press 2009), Campbell and Twenge analyzed several decades worth of data from the Narcissism Personality Inventory, a questionnaire administered in psychology surveys that asks participants to choose between two statements like "I try not to be a show-off" and "I will usually show off if I get the chance." The psychologists found that narcissism has been growing since the early 1980s, especially among young people.

Nathan DeWall, a psychologist at the University of Kentucky, has come to the same conclusion based on quite a different avenue of research. DeWall and his colleagues analyzed the lyrics of songs on the Billboard Hot 100 Chart from 1980 to 2007. They found a statistically significant trend toward narcissism in the music, with the words "I" and "me" gradually replacing "we" and "us." Recent examples of narcissism in popular songs include Justin Timberlake's 2006 proclamation, "I'm bringing sexy back," and Beyoncé's 2005 line, "It's blazin', you watch me in amazement."

Corresponding to the rise in narcissism is a related trend toward hostility and anger and away from happiness and contentment. Narcissism and outward hostility have been linked by psychology research in the past, and DeWall's analysis, published in the journal Psychology of Aesthetics, Creativity and the Arts, shows that it is linked in song lyrics as well.

"In the early '80s lyrics, love was easy and positive, and about two people," Twenge told the New York Times. "The recent songs are about what the individual wants, and how she or he has been disappointed or wronged."

In the 2008 Weezer song "I'm the Greatest Man that Ever Lived," for example, lead singer Rivers Cuomo sings "I'm the meanest in the place, step up, I'll mess with your face." The irony? The song is a remake — and rewrite — of an old Christian folk song about love and humility.