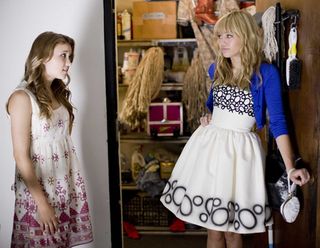 While popular TV shows of past generations, such as "Happy Days," focused on values including benevolence, self-acceptance and tradition, today's shows emphasize fame as the No. 1 value, according to a new study.

Researchers reviewed the values of characters in popular television shows for 9- to 11-year-olds, from 1967 to 2007, with two shows per decade evaluated. (For example, the researchers evaluated "The Andy Griffith Show" and "The Lucy Show" in 1967, "Laverne & Shirley" and "Happy Days" in 1977, and "American Idol" and "Hannah Montana" in 2007.)

The shows were evaluated for 16 values, including community feeling (being part of a group), spiritualism, tradition and popularity. Although community feeling was the No. 1 value in 1967, 1977 and 1997, by 2007, it had fallen to No. 11. In 2007, the top five values were fame, achievement, popularity, image and financial success.

"The rise of fame in preteen television may be one influence in the documented rise of narcissism in our culture," study researcher Patricia M. Greenfield, a psychology professor at UCLA, said in a statement. "Popular television shows are part of the environment that causes the increased narcissism, but they also reflect the culture."

In 1997, the top five values were community feeling, benevolence (being kind and helping others), image, tradition and self-acceptance. In 2007, benevolence dropped to the 12th spot, while financial success went from 12th place in 1967 and 1997 to fifth in 2007.

The two least emphasized values in 2007 were spiritualism (No. 16) and tradition (No. 15). Tradition had previously ranked No. 4 in 1997. The shifting values in TV shows convey messages to children about what's important in society, according to Greenfield.

Researchers analyzed Nielsen demographic data to determine the most popular shows with 9- to 11-year-olds and then conducted a survey of 60 participants, ages 18 to 59, to determine how important each value was in episodes of the various shows.

"The biggest change occurred from 1997 to 2007, when YouTube, Facebook and Twitter exploded in popularity," said lead researcher Yalda T. Uhls, also of UCLA. "Their growth parallels the rise in narcissism and the drop in empathy among college students in the United States, as other research has shown."

"We don't think this is a coincidence," Uhls added. "Changes we have seen in narcissism and empathy are being reflected on television."

The study is detailed in the July issue of Cyberpsychology: Journal of Psychosocial Research on Cyberspace.