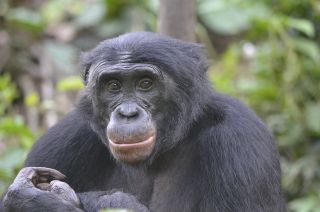 Fizi, an adult male bonobo at Lola ya Bonobo Sanctuary in the Democratic Republic of the Congo. A new study of these African apes hints at how human cooperation came to be.
(Image: © Christopher Krupenye, Duke University)

"You like me because I'm a scoundrel," interstellar smuggler Han Solo confidently told Princess Leia Organa in the 1981 film "The Empire Strikes Back." And scientists recently discovered a similar preference in bonobos, the great apes that are close relatives of chimpanzees.

Bonobos (Pan paniscus) are helpful sweethearts compared with their more aggressive chimp cousins (Pan troglogytes). But a new study found that these generally peaceful primates were also more likely to respond positively to individuals that were selfish, bullying or downright mean.

In other words, they're drawn to jerks. [8 Humanlike Behaviors of Primates]

Of course, Han Solo ultimately proved that he was quite a bit nicer than his self-serving manner initially suggested. But bonobos demonstrated in a series of trials that they were more likely to favor individuals that treated others poorly.

Prior research has shown that bonobos go out of their way to help others, even when their assistance hasn't been requested and they receive no reward for lending a hand. But when scientists showed bonobos videos in which some characters prevented others from reaching a goal, the bonobo subjects unexpectedly preferred the harmful individuals to the helpful ones.

In three experiments, bonobos watched animated and live-action videos that displayed characters attempting to complete a task; some characters helped, while other characters interfered. After viewing the videos, the bonobos were given a choice of accepting a food reward from either the helpful character or the pest, and the majority of the bonobos chose the troublemaker for their treat.

A fourth video experiment showed the bonobos a competition between two characters, with one dominant character succeeding by displacing its rival. When the bonobos were later offered a choice between the two individuals, they selected the one that had behaved more forcefully, the researchers discovered.

Bonobos' liking for those that mistreat others may stem from a bias toward dominant individuals; forging a bond with a more aggressive bonobo could provide benefits within social groups, the study authors reported. Humans, on the other hand, typically respond more positively toward acts of altruism than of selfishness, according to previous studies. This suggests that consistently gravitating toward helpers and shunning antisocial acts is likely a unique human preference that emerged as we developed survival strategies involving cooperation among many individuals, the researchers concluded.

The findings were published online Jan. 4 in the journal Current Biology.