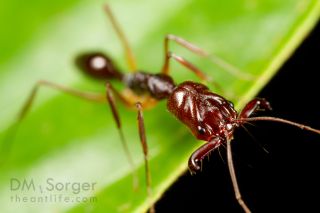 A species of trap-jaw ant, Odontomachus rixosus, has been found to exhibit a previously unseen jumping behavior, using its legs rather than its powerful jaws. The discovery identifies O. rixosus as the only ant species that can jump with either its legs or its mandibles.
(Image: © D. Magdalena Sorger)

Trap-jaw ants are known for using their powerful jaws to launch themselves into the air, somersaulting several times their own body length to evade predators. But some of these ants have another trick in their escape arsenal. Scientists recently discovered a trap-jaw species that leaps with its legs, a behavior that is extremely rare in ants and previously unknown in the trap-jaw family. Talk about getting a jump on the competition.

Magdalena Sorger of North Carolina State University and author of the study describing this unusual behavior, was collecting trap-jaw ants in Borneo with a field assistant in 2012, when they noticed something "extremely strange," she told Live Science. [Watch Trap-Jaw Ants Show Rare Jumping Ability]

Sorger was used to seeing Odontomachus rixosus, a species of trap-jaw ant, perform jaw jumps, which typically propelled the ants backward (sometimes onto a scrutinizing scientist's face). But the ants were doing something quite different.

"They were jumping forward," said Sorger, who is an evolutionary ecologist. "I'd never seen them do that before."

To "jump" with their jaws, trap-jaw ants stretch their massive mandibles wide and then snap them shut. Acting like a spring-loaded catapult, the closing snap shoots the ant out of harm's way. [Watch Ants Use 'Spring-Loaded' Mandibles To Escape From Predators]

Other ant species employ equally novel solutions for getting around. Wingless tropical ants drop from their tree habitats when threatened, using their hind legs as rudders to help them glide to safety. Some ant species are swimmers, while some ford watery obstacles by linking their legs to form living rafts and bridges. Still others can "limbo," navigating under low-hanging barriers without losing speed.

But leg jumping in ants is exceptionally rare — of 326 ant genera, only three are known to jump with their legs. Once Sorger noticed this forward jumping in the Borneo trap-jaws, she started looking more closely at how they behaved when she collected them.

"I saw them jumping almost every time," she recalled.

Initially, Sorger suspected the ants might be jumping because that was an easier way to navigate their leafy habitat. She returned to Borneo in 2013 specifically to document and analyze leg-jumping, and soon realized that the ants jumped in response to disturbances.

"They would try to escape from you by hopping forward," Sorger told Live Science.

Sorger found that touching the ants' legs induced jumping. Some of those were jaw jumps, but most of the time they were jumping with their legs. And Sorger observed that leg-jumping had clear advantages. The jaw jumps, while swift and powerful, were difficult for the ants to control. The motion typically propels the ants backward, flipping them upside-down and requiring a moment of recovery time, which could be critical in escaping a hungry predator, she said.

Even among the other groups of ants that jump with their legs, the trap-jaw jumpers stand out. While all the leg-jumpers — including the trap-jaws — are solitary hunters, the three previously known groups share one feature that trap-jaws lack: large eyes. Sorger pointed out to Live Science that the other ant groups use their jumps to capture prey, which would require superior vision, but she did not observe the trap-jaw species jumping forward to hunt. "They go under the leaves, and you can hear them catch prey — it's a little snap — but you can't see them," Sorger explained. She suggested that perhaps the trap-jaws' mandibles were enough of a hunting advantage, so it didn't require the visual capabilities of its smaller-jawed cousins.

Sorger anticipates that further study will confirm if trap-jaws' forward jumps are used solely for escaping from danger, or for ambushing prey, as well. Closer examination of the biomechanics of trap-jaws and other jumping ants may also help explain why this handful of exceptions among the ant family is able to spring ahead.

The findings were published online today (Dec. 1) in the journal Frontiers in Ecology and the Environment.