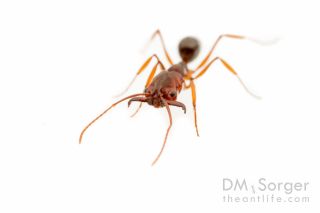 This species of trap-jaw ant, Odontomachus relictus, is only found in Florida. It is a cousin of O. haematodus, a South American species that has recently taken hold along the Gulf Coast.
(Image: © Magdalena Sorger)

An aggressive type of trap-jaw ant with a mighty bite is gaining ground in the U.S. southeast, new research finds.

The species, Odontomachus haematodus, is native to South America, but it seems to have spread recently along the Gulf Coast without attracting much attention until now.

"The fact that some of these species are spreading is interesting, in part because these giant ants have managed to expand their territory without anyone noticing," Magdalena Sorger, a doctoral student at North Carolina State University, said in a statement. "We know very little about these ants, including how they interact with native ant species in the areas they're invading." [See Amazing Photos of the World's Ants]

O. haematodus may have been hiding in the United States unnoticed for more than five decades. The earliest example of the species in the country comes from insect specimens kept in the Smithsonian National Collection: O. haematodus samples were picked up in Alabama in 1956.

Often mistaken for its North American cousins, O. haematodus, when in small groups, likely blended in across the Southeast over the next several decades, but now the population is too big to ignore. Today, the species is common along the Gulf Coast, from the New Orleans area of Louisiana east to Pensacola, Florida, Sorger and colleagues wrote in their study published in the journal Zootaxa.

The ants have a shiny body ranging from yellow to black in color, and they have taken root in a variety of habitats. Their nests have been found in rotting logs in forests as well as in building foundations in urban areas, the researchers wrote.

Trap-jaw ants of the genus Odontomachus are remarkable for their strong set of mandibles. The creatures' spring-loaded jaws open 180 degrees and quickly snap shut to grab prey or propel the ant into the air to escape predators. (The insects had previously been called "leaping ants.") In 2006, researchers at the University of California, Berkeley, clocked the jaw-snapping speed of Odontomachus bauri and found this species closes its mandibles at 78 to 145 mph (35 to 65 meters per second).

While native trap-jaw ants found in the United States do not usually sting humans unless handled, O. haematodus are more aggressive. In defense of their turf, ants of this species will immediately sting intruders who so much as place a hand in the leaf litter near their nests. According to anecdotal reports, the insect sting is painful but doesn't last long, Sorger and colleagues wrote.

The team hopes their research paper will help scientists identify which species of trap-jaw ants they encounter in the future.