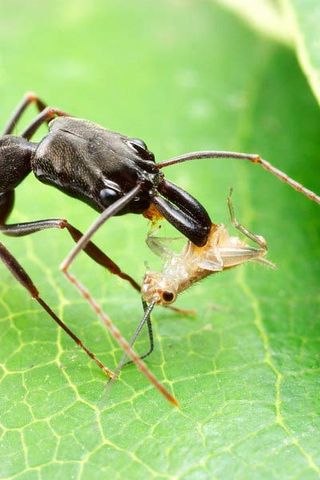 The mandibles of the trap-jaw ant close at speeds up to 145 mph, the fastest predatory strike in the animal kingdom. Photo courtesy Alex Wild/myrmecos.net

Scientists have discovered the fastest bite in the world, one so explosive it can be used to send the Latin American ant that performs it flying through the air to escape predators.

These powerful jaws could serve as inspirations for the propulsion systems of miniature robots, "for instance for rescue operations," researcher Andrew Suarez, an ecologist and entomologist at the University of Illinois at Urbana-Champaign, told LiveScience.

Suarez and his colleagues focused on the trap-jaw ant, Odontomachus bauri. Since the 1800s, researchers had seen these ants zing through the air based on the power of their incredibly strong jaws. Until now, no one was able to prove the ants intentionally used their jaws for jumping.

Suarez distinctly remembered the first time he and fellow researcher Brian Fisher at the California Academy of Sciences in San Francisco dug up a trap-jaw ant colony "and had them shooting all over the place like popcorn—many of which landed on us and started stinging."

Suarez and Fisher, along with University of California at Berkeley researchers Sheila Patek and Joseph Baio, found the ant's jaws accelerate at 100,000 times the force of gravity. This means they can snap shut 2,300 times faster than a blink of the eye to reach speeds up to 145 mph, exerting forces 300 to 500 times the ant's body weight.

"Until recently, cameras were simply not fast enough to capture the movement of the mandibles," Suarez said. He and his colleagues had to use high-speed video cameras capable of taking up to 250,000 frames per second to film the ant jaws, roughly 10,000 faster than speeds movies are usually shot at.

Falcons can dive as fast as 300 mph, but they rely on gravity and start from great heights. Aside from getting a gravity assist or other help, these snapping ant jaws are by far the fastest-moving body parts in the animal kingdom. The scientists reported their findings online Aug. 21 via the Proceedings of the National Academy of Sciences.

Experiments revealed the ants could use their jaws to snap at prey, strike at intruders or flee from predators.

In attacks against intruders, dubbed "bouncer defenses," the ants slam their mandibles against their targets—in experiments, thin strips of plastic or metal—presumably to injure them or bounce them away. Coincidentally, this can also catapult the ants up to 15 inches away. This distance, translated for a 5-foot-6-inch tall person, roughly equates to a record-shattering Olympic long jump of 132 feet.

When the researchers introduced predators such as spiders, the trap-jaw ants at times used so-called "escape jumps," directing their jaws toward the ground, launching themselves up to 3 inches in the air. For our 5-foot-6-inch Olympian, that's 44 feet. The world record in the high jump is just slightly over 8 feet.

Suarez is now working with colleagues to see if this jaw-powered propulsion the ants use could find use in engineering.

"It's just another example of looking towards nature and evolution to think of innovative solutions," he said.