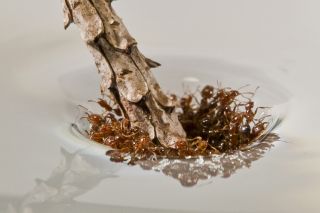 An ant raft stays on top of the water surface even when it is hardly pressed by a branch -- showing water repellency and buoyancy.
(Image: © Nathon Mlot)

What behaves like a solid and a liquid and is red all over? Rafts of fire ants, according to new research that describes the unusual physical nature of these structures for the first time.

Solenopsis invicta, a common species of fire ant, originates from the rainforests of Brazil, where heavy precipitation can cause flooding to occur up to twice daily. In order to stick together as a colony during these deluges, the fire ants hook their legs and mouths together to create a living, breathing waterproof material that floats for hours, or even weeks, if necessary, until floods subside.

These so-called fire-ant rafts contain nearly 200 bodies per square inch (6.5 square centimeters); they can grow to be as large as garbage bin lids in the case of large colonies, but more typically, they grow to the size of small plates. The ants are wired to assemble themselves quickly in response to an emergency, and can organize thousands of bodies in less than two minutes, according to study researcher David Hu at the Georgia Institute of Technology, who has studied these rafts for the past several years and describes them as a living fabric. [Image Gallery: Ants of the World]

"They are all acting together, and there are so many of them, that they are really becoming a single material," Hu told LiveScience.

Hu and his team have now conducted the first-ever experiments to calculate the physical characteristics of these rafts, in an effort to inform materials scientists interested in creating similar structures for robotics and potentially construction as well.

With a tool called a rheometer — which measures a material's resistance to motion and is used to check the viscosity of consumer products such as shampoo and chocolate — the team measured and compared the physical characteristics of clumps of living and dead fire ants.

They found that living fire ants within a raft constantly rearranged themselves in response to forces, such as the nudge of a stick in the lab or a drop of rain in nature, and that this rearrangement allows the rafts to bounce back elastically, like rubber, when a force is removed.

"No matter what you do, they are always constantly rearranging their bodies to respond to stresses," Hu said. "Where someone pushes on them, they initially act like a solid, but if you leave the plate, there they will also flow and respond. There are very few materials that act like that."

This responsiveness allows the fire ants to deal with obstacles they may face while floating around the rainforest floor, such as small rocks or bursts of waves in a puddle, Hu said.

The team found that dead fire ants, on the other hand, behaved like solids only and were immediately discarded from rafts, because they jeopardize the integrity of the superorganism, Hu said.

By coming up with a set of equations that describes the movement of these rafts, Hu believes his team's work will inform ongoing efforts to create small, self-arranging robots that could be deployed in tight spaces to make hard-to-reach-measurements, or even self-healing building materials that could emerge from within a broken bridge, for example, and fill in crevices to prevent further damage.

The team will present their findings today (Nov. 26) at the annual meeting of the American Physical Society Division of Fluid Dynamics in Pittsburgh.