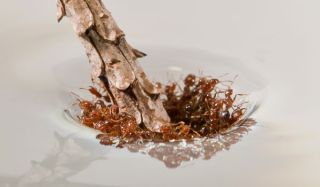 A fire ant raft is so elastic and buoyant that it resists probing by a twig.
(Image: © Nathan Mlot and Tim Nowack)

It's the ultimate vehicle for an emergency flood escape. It can assemble itself in about 100 seconds, and keep thousands to millions of passengers safe and afloat for days, even weeks.

Floating clusters of fire ants are a feat of natural engineering, and some researchers wanted to know just how these ants create such safe, long-lasting rafts out of themselves. The result means they can survive floods in their native South American habitats as well as migrate long distances. [Image of fire-ant raft]

A team led by Nathan Mlot, a doctoral student studying bio-inspired engineering at Georgia Institute of Technology, collected fire ants by roadsides in Atlanta and then filmed and froze the ants when they formed these floating clusters. [Fire Ants Go Global]

Once deposited into water in the lab, a spherical cluster of ants spread outward, like a drop of molasses.

The ants grab onto one another just as they would any surface: Using claws, jaws and adhesive pads on their legs, which secrete an oily fluid that allows them to stick to relatively smooth surfaces, according to Mlot. Once complete, a raft takes on a pancake shape.

An individual ant's hard outer covering, called a cuticle, is hydrophobic, or water-repelling. The cuticle's rough surface allows an ant to trap air against its body when submerged; forming what is called a plastron layer. A massive group of ants, all linked together, has an enhanced water-repellent ability such that the whole group can float while preventing water from penetrating the raft, Mlot said.

Ant rafts appear to benefit from their makers' tiny size, according to the researchers.

"At the scale of millimeters, ants have great strength, high speed and the ability to trap air pockets when submerged, which in turn makes their rafts water repellent," they write in the most recent issue of the journal Proceedings of the National Academy of Sciences. "These abilities will likely vanish at large sizes."

The ant rafts have their own kryptonite, however: soap. It and other surfactants – substances that break up surface tension of the water – wreak havoc with the rafts.

"If you introduce just a small amount of soap to the surface of the water to lower surface tension then the raft will begin to immediately sink," he said. The individual ants lose their plastron layer and can drown within seconds, he said.