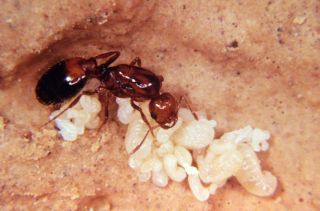 A colony-founding queen of the invasive species of fire ant that is believed to have spread to California, China and Australia from the southern U.S.
(Image: © Kenneth Ross)

In the past century, imported red fire ants have traveled the world and established colonies in far-flung places like Australia and China, oceans away from their native range in South America. Now a genetic study has retraced their routes, pinpointing the southern United States as the likely source for these invasions.

The stinging ants, a fire ant species known as Solenopsis invicta, arrived in Mobile, Ala., from South America about 80 years ago before rapidly spreading throughout the South.

It's not clear exactly how they hitched a ride, since the ants require very little to survive a long time, said Kenneth Ross, an entomologist at the University of Georgia and one of the study’s researchers.

"They can survive for long periods under very unnatural circumstances," Ross told LiveScience. Their only requirements are shelter – soil is a possibility, but not necessary – and moisture, he said.

Once established, they are blamed for disrupting local ecology by displacing native ants and other species, interfering with agriculture and stinging people who happen to step on their large mounds. [Lizards' Dance Avoids Deadly Ants]

"These colonies have often half a million workers — you don't get stung just once," Ross said.

Ross and his colleagues sampled 2,144 colonies from 75 sites in the ants' native range in South America, the southern United States and newly invaded areas in California, China, Taiwan and Australia.

The researchers performed multiple types of genetic analyses, including one that looked at mitochondrial DNA, which is found in the energy-producing centers of cells. Using this analysis, they identified 322 different types of the stinging ant species. However, nearly all of these were confined to the ants' native range in Argentina. Three predominant types that were found throughout the U.S. sites were rare in the native range. Meanwhile, those three types were the only ones to appear in the newly invaded areas, Ross told LiveScience.

This sequential loss of diversity as the ants filtered from South America to foreign lands is typical of colonizations, he said.

An additional analysis indicated that the ants had been introduced independently to the new areas from the southern United States, rather than spreading from one new area to another.

All told, they found that the South was the source of at least eight introductions, the one exception being the ants' arrival in Taiwan from California. The California ants also originated in the southern United States, wrote the researchers (led by Marina Ascunce, who did most of the research while working with the U.S. Department of Agriculture's Agricultural Research Service).

There is also evidence that fire ants in Trinidad and New Zealand, which were not included in this analysis, also originated in the United States, they wrote.

Secret to their success

The findings did not surprise Walter Tschinkel, a professor at Florida State University and author of the book, "The Fire Ants" (Harvard University/Belknap Press, 2006). He was not involved with the study.

The dispersal of fire ants from the South around the globe was inevitable, Tschinkel said. "I made the prediction in my book, page 72."

"The source of all these migrants is almost certainly the huge North American population rather than the original South American homeland," Tschinkel wrote on that page of the book. "As world commerce surges upward, S. invicta will find even more chances to hitch rides to foreign places, repeatedly demonstrating its prowess as a traveler and invader."

Tschinkel describes the fire ant as a weed, the animal equivalent of the dandelion, because it thrives in landscapes disturbed by humans.

Fire ants aren't the primary source of ecological disruption, including the loss of native ants; the real culprits are human beings, who alter the landscape in the first place, Tschinkel said.

"That is why humans are the fire ant's best friend," he said.