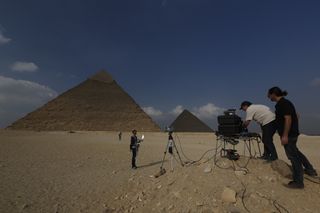 In a new scanning project, scientists hope to answer questions about the pyramids, including the Great Pyramid of Khufu (seen at right) and the Pyramid of Khafre (seen at left).
(Image: © © www.HIP.Institute / Philippe Bourseiller)

Speculation swirls anew that within Egypt's Great Pyramid of Khufu there lies a hidden tomb, possibly holding the pharaoh himself, sealed there for thousands of years.

The discovery of so-called thermal anomalies by a team scanning the pyramid suggests an as-yet-unidentified open space that could be evidence of a tomb.

Scientists and explorers have been searching for an undiscovered tomb within the Great Pyramid since the 19th century, so far failing to find one. In the 1830s, one explorer even used gunpowder explosions to try to expose hidden tombs and chambers. [See Photos of the Scanning Project at Egypt’s Great Pyramid]

A new initiative, called the Scan Pyramids project, is being undertaken by a large team that includes contributors from universities, companies and the Egyptian Ministry of Antiquities. Using thermal imaging, radiography and 3D reconstruction, the team is gathering data on the Great Pyramid of Khufu, the pyramid of Khafre (which is also at Giza) as well as two pyramids located at the site of Dahshur called the Red and Bent pyramids (those two pyramids were built by the pharaoh Snefru).

The Great Pyramid of Khufu is called the "Great Pyramid" because it is the largest pyramid in the world. The pyramid of Khafre is located beside it at Giza.

The pyramids being scanned represent three generations of Egyptian pharaohs who reigned more than 4,500 years ago. Snefru is the father of Khufu, while Khafre is Snefru's grandson.

The data the team is gathering will help Egyptologists determine how the pyramids were built and how pyramid building evolved over time, and may help the researchers detect the presence of any hidden chambers or tombs.

The Ministry of Antiquities recently announced that thermal scans have revealed that all four pyramids have thermal anomalies, or temperature variations in certain areas of the pyramids. The ministry points out that there are numerous possible explanations for these variations, including internal air currents, the use of different building materials and, of course, the existence of undiscovered chambers within the pyramids.

The scans of the Great Pyramid reveal temperature variations on the eastern side of the pyramid at ground level as well as in the upper part of the structure. Again, there are many possible explanations for these variations.

Nevertheless, the finding has raised the possibility that there are undiscovered open areas, potentially containing a tomb, inside the Great Pyramid. [Photos: Amazing Discoveries at Egypt's Giza Pyramids]

Egyptian Antiquities Minister Mamdouh el-Damaty took a team of scientists and journalists out to one of the anomalies (located near ground level) and speculated about what could be behind it.

"[In] the first row of the pyramid's stones, [they] are all uniform. Then we come here and find that there's a difference in the formation," el-Damaty told the scientists and journalists, as reported by the Associated Press. He explained that there could be an open area behind the pyramid’s stones. Media reports have hyped his comments a bit by speculating this open area could be a tomb.

Members of the Scan Pyramids project did not claim to have found an undiscovered tomb in the Great Pyramid. Though the temperature measurements suggest the possibility of an open area, el-Damaty never specified such a space was a tomb.

Even so, the idea that an undiscovered burial site is hidden within the Great Pyramid goes back many years and long predates the work of the Scan Pyramids project.

At present, archaeologists know of the existence of three large chambers within the Great Pyramid. One of these chambers is called the "Queen's Chamber" (although there is no evidence that a queen was buried there). In the 1990s, investigations began on two small shafts that extend out from this chamber and go upward on a shallow slope.

Several robots were sent up these shafts. The robots showed that both shafts lead to doorways with copper handles. When a robot drilled through one of the doors, it revealed a small chamber in front of another sealed door.

This work has led Zahi Hawass, who at the time of the discovery of the three chambers was head of Egypt's Supreme Council of Antiquities, to put forward the hypothesis that these shafts lead to the tomb of the pharaoh Khufu.

"I really believe that Cheops [another ancient name for Khufu] chamber is not discovered yet and all the three chambers were just to deceive the thieves," Hawass told Live Science in an interview in Toronto in June 2013.  He added that he believes "the treasures of Khufu [are] still hidden inside the Great Pyramid, and these three doors could be the key to open this burial chamber."

Hawass hopes to resume robot exploration of the shafts in the future so that this hypothesis can be tested out further, he said.

Whether the thermal imaging will result in the discovery of such a tomb is unknown. The Ministry of Antiquities said it will need to investigate the various explanations for the anomalies in the coming years.

In the 1830s, Richard William Howard Vyse, a colonel in the British army, was also captivated by the idea that there could be secret chambers in the Great Pyramid.

However, back in Vyse's time, there were no robots or thermal-imaging technology, so Vyse tested his theory using gunpowder-based explosives (dynamite hadn't been invented yet). He blasted his way through parts of the Great Pyramid of Khufu.

Eventually, his team found a few small chambers near the top of the pyramid that the ancient Egyptians may have used to relieve stress on the pyramid's structure. Vyse found no treasure or burials inside these chambers, but he did find some graffiti drawn by ordinary workers who helped build the Great Pyramid.