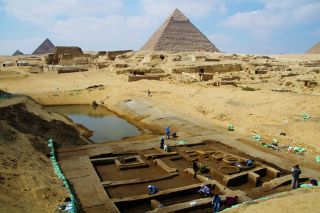 Archaeologists working at the Giza Pyramids have made several new discoveries that shed light on life at the time the pyramids were built. Among the discoveries is a basin that may have been part of a thriving harbor and a "silo building complex," where researchers have found numerous bones from the forelimbs of cattle, offerings in ancient Egypt, suggesting royal cult priests perhaps venerating the pharaoh Khafre occupied the complex.
(Image: © Courtesy AERA.)

TORONTO — The remains of a bustling port and barracks for sailors or military troops have been discovered near the Giza Pyramids. They were in use while the pyramids were being built about 4,500 years ago.

The archaeologists have been excavating a city near the Giza Pyramids that dates mainly to the reign of the pharaoh Menkaure, who built the last pyramid at Giza. Also near the pyramids they have been  excavating a town, located close to a monument dedicated to Queen Khentkawes, possibly a daughter of Menkaure. The barracks are located at the city, while a newly discovered basin, that may be part of a harbor, is located by the Khentkawes town.

This basin may be "an extension of a harbor or waterfront," Lehner said at a recent symposium held here by the Society for the Study of Egyptian Antiquities. Lehner said his team also found at Giza charcoal remains of cedar, juniper, pine and oak, all trees that grew in a part of the eastern Mediterranean called the Levant, along with more than 50 examples of combed ware jars, a style of pottery from that region. Additionally, large amounts of granite from Aswan, located on ancient Egypt's southern border, have long been known to be at Giza, and these could have been brought down the Nile River to Giza's port.

"Giza was the central port then for three generations, Khufu, Khafre, Menkaure," said Lehner in his presentation, referring to the three pharaohs who built pyramids at Giza.

Where there is a port there are sailors. At the city the archaeologists found evidence that a series of long buildings called "galleries" held troops who could have participated in voyages to the Levant and possibly guarded VIPs while at Giza. These galleries were about 23 feet (7 meters) high and each set was at least 113 feet (34.5 meters) long, north to south.

Archaeologists once assumed galleries like these held pyramid workers, something that recent discoveries call into question; in recent excavations of the galleries Lehner's team found charcoal remains from wood, particularly cedar, that was originally from the Levant. [Photos: The Lost City of the Pyramid Builders]

"What was all this cedar from the Levant doing in a common workers barracks?" Lehner asked. In fact, these troops are represented in the tombs of highly placed officials and in pyramid temples. "You have representations of these gangs, these troops, repeated over and over again," he said, adding that the word for them can be translated as "escort" or "the following." Each individual gallery could hold about 40 people comfortably, which is a unit these troops could be organized into, Lehner said.

"I wonder if we are basically seeing barracks not of the workers, but of elite crews of ships," Lehner said. A pharaoh named Sahure had images in his valley temple (part of his pyramid complex) of troops near the king's "ship of state," he noted.

Lehner's suspicions that the galleries were meant for troops were reinforced in 2012 when the archaeologists discovered a broken hippo hip. In ancient Egypt, hippos were considered nuisances, as the animals ate crops at night. "The young troops go out and they harpoon them and spear them," he told the Toronto audience.

There's actually a ritual in which a captured and bound hippo is harpooned to death. This ritual could have taken place at Giza at a public place such as the harbor, the hippo meat (apparently quite tasty) being consumed afterwards by the troops in the galleries.

These troops didn't always get the best food. The hippo meat would have been a nice respite from their everyday diet. The bones the archaeologists found in the galleries indicate they consumed lots of goat and sheep as well as oily, bony, catfish, said Richard Redding, chief research officer at Ancient Egypt Research Associates, in another symposium presentation. The troops didn't get as much cattle or Nile perch, which were considered the more desirable forms of meat and fish.

Redding is also a research scientist at the Kelsey Museum of Archaeology at the University of Michigan.

Where are the pyramid builders?

The recent discoveries at Giza leave a mystery in their wake: Where were the dwellings of the pyramid builders, the regular workers, located?

The answer may be on the pyramids themselves. "We could probably be correct imagining workers staying on the immense ramps, on the unfinished pyramid as it rose," said Lehner in an email to LiveScience, adding that they could also have been living in the quarries in simple dwellings akin to "lean-to's."

The remains of these workers can be found in ancient dumps near the pyramids. "In 2004 we helped the Giza inspectors salvage material from an immense dump off the northern side of the Great Pyramid," said Lehner in the email. "We did not find remains of workers huts or lean-to's, but we did find old cattle bone, strips of cloth, rope and string of all gauges, fragments of wood, including part of a hammer, and other material of the workers."