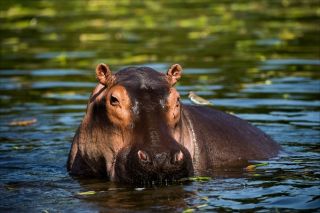 A hippopotamus in the water with a bird on its back.
(Image: © Uryadnikov Sergey | Shutterstock)

Hippopotamuses (Hippopotamus amphibius) are large, round, water-loving animals that are native to Africa. The word "hippopotamus" comes from the Greek word for "water horse" or "river horse," although hippos and horses aren't closely related. The closest living relatives to hippos are pigs, whales and dolphins, according to the San Diego Zoo.

Hippos live in sub-Saharan Africa. They live in areas with abundant water, as they spend most of their time submerged to keep their skin cool and moist. Considered amphibious animals, hippos spend up to 16 hours per day in the water, according to National Geographic.

Hippos are social beasts, hanging out in groups called schools, bloats, pods or sieges. Schools of hippos usually consist of 10 to 30 members, including both females and males, although some groups have as many as 200 individuals. No matter the size, the school is usually led by a dominant male.

Hippos are very loud animals. Their snorts, grumbles and wheezes have been measured at 115 decibels, according to the San Diego Zoo — about the same volume as you'd get when 15 feet (4.6 m) from the speakers at a rock concert. These booming creatures also use subsonic vocalizations to communicate.

Hippos are aggressive and are considered very dangerous. They have large teeth and tusks that they use for fighting off threats, including humans. Sometimes, their young fall victim to adult hippos' tempers. During a fight between two adults, a young hippo caught in the middle can be seriously hurt or even crushed.

Though hippos move easily through the water, they can't actually swim. According to the San Diego Zoo, these animals glide through the water by pushing themselves off other objects. And they can stay under water for up to 5 minutes without coming up for air, according to National Geographic.

Hippos have a healthy and mostly herbivorous appetite. Adults eat about 80 lbs. (35 kg) of grass each night,traveling up to 6 miles (10 kilometers) in a night to get their fill. They also eat fruit that they find during their nightly scavenging, according to National Geographic. If food is scarce, hippos can store food in their stomachs and go up to three weeks without eating.

Although hippos were long believed to be exclusively herbivorous, 2015 study published in the journal Mammal Review found that hippos occasionally feed on the carcasses of animals, including other hippos.

Female hippos have a gestation period of eight months and have only one baby at a time, according to the San Diego Zoo. At birth, the calf weighs between 50 and 110 lbs. (23 to 50 kg). For its first eight months, the calf nurses while its mother is on land, or it swims underwater to suckle. When it dives, the calf closes its nose and ears to block out water. All hippos have this ability. Hippos also have membranes that cover and protect their eyes while they are underwater.

At 5 to 7 years old, the hippo calf is fully mature, according to the San Diego Zoo. The median life expectancy of a hippo is 36 years.

The hippopotamus is considered the world's deadliest large land mammal. These semiaquatic giants kill an estimated 500 people per year in Africa, according to the BBC. Hippos are highly aggressive and are well-equipped to deliver considerable damage to anything that wanders into their territory.

For example, in 2014, a hippo attacked a small, unsuspecting boat filled with Nigerian school children, killing twelve students and one teacher on board, an Australian news outlet reported. Conflicts between humans and hippos also occur when hippos wander onto land in search of food.

According to the International Union for Conservation of Nature (IUCN), the common hippo isn't endangered, but it is vulnerable to extinction. The IUCN estimates that between 125,000 and 148,000 hippos remain in the wild. Poaching and habitat loss reduced the hippo's global numbers during the late 1990s and early 2000s, but the population has since plateaued thanks to stricter law enforcement, according to the IUCN.

Notorious drug lord Pablo Escobar famously kept hippos, giraffes, elephants and other exotic animals on his estate in northwestern Colombia. When Escobar was killed in 1993, the Colombian government seized all of his assets, including his menagerie. Most of his animals were transferred to zoos and aquariums, but his four hippos were left to fend for themselves. Those four animals made their way into Colombia's waterways, where they multiplied. Today, between 40 and 60 of their descendants roam the landscape, according to an investigation by biologists at the University of California, San Diego. This invasive population poses a threat to the community, because the hippos occasionally trample crops and charge at humans. However, many Colombians have grown fond of the uninvited ungulates and vehemently oppose their removal. Some scientists, though, fear that the animals' continued presence could have unintended consequences. "The risk to native species — such as manatees, turtles and fish — is high, and the environmental effect is unpredictable," Nelson Aranguren-Riaño, biologist at Pedagogical and Technological University of Colombia, said in a statement.

Colombian wildlife officials have sterilized a handful of male hippos in an attempt to slow the growth of the population, but there are currently no plans to relocate or sterilize the entire population.

This article was updated on Nov. 1, 2018, by Live Science Contributor Annie Roth.