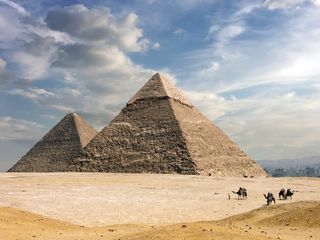 Zahi Hawass told LiveScience that he believes the burial chamber of the pharaoh Khufu (also known as Cheops) is hidden, along with treasure, within his Great Pyramid.
(Image: © Vladimir Korostyshevskiy | Shutterstock.com)

TORONTO — Zahi Hawass is back.

The famous, and at times controversial, Egyptologist is free of legal charges, free to travel and is launching a worldwide lecture tour with the aim of getting tourists back to Egypt, he told LiveScience in an interview.

Hawass also said that he believes there are some fantastic discoveries waiting to be made, including more tombs in the Valley of the Kings and a secret burial chamber, containing treasure, which he believes to be inside the Great Pyramid built by the pharaoh Khufu (also known as Cheops). [Image Gallery: Egypt's Valley of the Kings]

It's a turnaround for the archaeologist, who, just a few months ago, was under investigation and banned from traveling outside Egypt. At the time, there were a number of allegations related to his tenure as Egypt's antiquities chief in Hosni Mubarak's former government. These allegations reportedly included allowing antiquities to travel out of the country illegally, wasting public funds and using his position inappropriately to aid a charity run by Suzanne Mubarak (wife of the deposed Hosni Mubarak). He was banned from travelling outside Egypt while under investigation.

Hawass was head of the Supreme Council of Antiquities for nearly 10 years and became Egypt's first-ever antiquities minister near the end of Mubarak's regime. A revolution succeeded in tossing out Mubarak in February 2011 and Hawass was dismissed from his post a few months later. "All the accusations against me were dropped, were completely false, and this is why everything's finished, I can travel, I can do anything," he told LiveScience in an interview after a lecture held here on Monday at the Royal Ontario Museum.

The massive gallery where the lecture was held was filled to capacity, with a waiting list just as robust. The museum's director Janet Carding said that Egypt's ambassador to Canada, Wael Aboul-Magd, helped bring Hawass to Toronto and was in attendance.

Hawass said that Toronto is only the beginning. He'll be in Montreal on June 6 and will be launching a worldwide tour.

Tourism plummeted after Egypt's revolution, resulting in lower ticket sales at ancient sites, a situation that has the antiquities ministry strapped for cash.

"We don't have any money at all for excavation or preservation," he told the audience.

A hidden chamber inside the Great Pyramid

In the interview, and in his lecture, Hawass said that he is excited at the robot work that has been going on over the past two decades at the Great Pyramid. One chamber in the pyramid  called the "Queen's Chamber" (although there is no evidence it was ever used for a queen’s burial) contains two shafts that go up into the pyramid but do not exit outside.

Robots have been up these shafts and found that both contain doorways with copper handles. When a robot drilled through one of the doors, they found a small chamber with what might be a sealed door behind it.

Ultimately, these shafts may point the way to a secret burial chamber where Khufu (Cheops) was buried, Hawass said. While the pyramid already has three known chambers (one of which contains a sarcophagus), he said the true burial place of the pharaoh has yet to be found.

"I really believe that Cheops chamber is not discovered yet and all the three chambers were just to deceive the thieves, and the treasures of Khufu [are] still hidden inside the Great Pyramid, and these three doors could be the key to open this burial chamber," he said in the interview. [Image Gallery: Glitzy Discovery at the Giza Pyramid]

"There is no pyramid of the 123 pyramids in Egypt that have these type of doors with copper handles," he added. "Really, I believe they're hiding something."

Another era for archaeology

Hawass is also very enthusiastic about finding new tombs in the Valley of the Kings. Within the past decade, two new tombs, KV 63 and 64, have been excavated and Hawass told LiveScience, and the Toronto audience, that he believes there are many more to be found.

Finding these tombs will pose a challenge. Ground-penetrating radar tests conducted while Hawass was antiquities chief had difficulty locating tombs and he said he believes that radar will not be effective in finding them.

Pharaohs were buried with their brains

If they find these pharaohs, they may also find their brains. Hawass and Dr. Sahar Saleem of Cairo University looked at CT scans of 12 royal mummies that date to between 1493-1156 B.C.

Based on their findings, detailed in the American Journal of Roentgenology, Hawass doesn't believe the Egyptians removed the brains of their dead pharaohs.  "All these ideas about removing brains came from Herodotus," he said, referring to a Greek historian who lived more than 2,400 years ago. "It was wrong."

Hawass pointed out that "the brain of Tutankhamun was desiccated (dried) out but still it's there."

A return as antiquities minister?

After a recent article in Smithsonian magazine, there was speculation that Hawass could be plotting his return as antiquities minister.

In the LiveScience interview, Hawass poured cold water over this idea, saying that it does not appeal to him at all.

"I only wear a suit and a tie when I come to give a lecture, but all my life, I'm in my jeans," Hawass said, adding he disagreed with the decision to make antiquities a cabinet-level position and hates the meetings required for a cabinet minister. "I can't stand being in the cabinet listening for nine hours of nonsense."

In terms of a future role in Egypt's antiquities ministry, Hawass said he plans to wait a year or two until the situation in Egypt improves. "In a year or two, after everything is relaxed, I would like to continue [building] the 24 museums" that are underway, he said. He also would like to help train young archaeologists and aid in repatriating Egyptian artifacts that are now abroad.