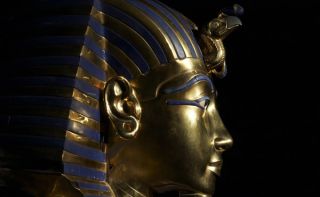 So you want to find a mummy. And, you don't want just any mummy, but a pharaoh an ancient Egyptian king. Bob "Mr. Mummy" Brier, an egyptologist from Long Island University who has investigated the famous remains of King Tutankhamen, among others, explains how it's done in just six steps.

Step 1. Look in the right place

Most of Egypt's ancient kings were buried on the west bank of the Nile, where the sun sets. Remote areas most commonly hold the dead burial sites are usually tucked out of the way, where people weren't likely to settle. If you want pharaohs from the Old Kingdom (around 2500 B.C.), check the pyramids, which were erected as great tombs during that era. More recent pharaohs, including King Tut, are buried in the Valley of the Kings and date to around between 1550 and 1250 B.C. [Who Really Killed King Tut? New Evidence Stirs Debate ]

Step 2. Know what to look for

There are two low-tech ways to find a hidden tomb. One is to check the desert floor for nonnative rocks. The Valley of Kings, for example, is made of limestone, so a hunk of the red granite, the type of rock typically used to construct tombs, is a red flag. Another method is to observe a rainstorm (rare) or a sand storm (not so rare). Check for the patterns running water or sweeping sands create as the sweep across the desert; they may disappear through cracks, revealing hidden subterranean structures. Once you've located a potential spot, use ground-penetrating radar to help identify chambers.

Want something more high tech? Try scouring data from NASA infrared satellites to detect differences in ground temperatures, which may point out cool, stony underground buildings. Last May, a team lead by archeologists from the University of Alabama, Birmingham used this technique to uncover 17 pyramids, nearly 3,000 settlements and 1,000 tombs.

Step 3. Ask before you dig

Egypt is protective of its national treasures, including its dead, so you'll need permission to excavate from the country's Supreme Council of Antiquities. You'll also need expertise. Every single team member must provide dossiers proving their qualifications to work at the site, from those who will do the physical excavation to the artists who will memorialize it. [Surprise! Ancient Egyptians May Have Invented Bowling ]

Archeologists survey the area of interest and set up a grid system using string. Each square in the grid is numbered to track where each artifact came from.

Even if you're in the right spot, your search may take decades. King Tut was discovered in the Valley of the Kings in 1922, and around 75 years passed before another pharaoh was found there. Only a few dozen have been discovered to date.

If this success record doesn't discourage you, the next step is to excavate. Look for pottery shards, which Brier says the Egyptians used like scrap paper, for short notes on pharaoh locations (you'll need to read hieratic, a cursive form of hieroglyphics).

Or, get a robot to help. Djedi, developed by Leeds University, Dassault Systèmes and Scoutek, helps explore sealed chambers. The robot can climb within walls of tight shafts on soft padded "feet," which leave no marks on the stone. It's outfitted with a 0.3-inch-diameter micro snake camera, miniature sonic device, a tiny beetle-like robot and a thin coring drill, all of which can probe walls to see what's on the other side.

In the old days, scientists unwrapped their discoveries to see what was inside, which today is a big no-no from a conservation standpoint. Instead, researchers haul in equipment to perform CT scans on site, revealing the pharaoh's skeleton and other treasures, including jewels.

Volunteer opportunities on Egyptian digs are rare. If you have a technical skill maybe as an engineer comfortable with radar scans, or a radiologist with CT scanners you might have a shot. Otherwise, check out Giza 3D, a joint project between Dassault Systèmes and Boston's Museum of Fine Arts, which will take you on a virtual tour of the pyramids. An opening date hasn't been set, but it may be ready by mid-2012.