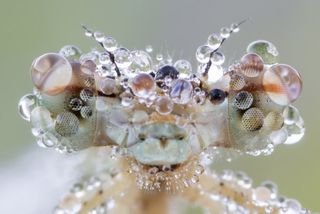 "Ewwww ... a bug!" is the reaction many people have when they feel an insect's six legs crawling on them. This revulsion is lamentable, for not only are the vast majority of insects completely harmless, we humans and most other complex life on the planet would be in dire shape without them.

"If insects were to disappear, the world would fall apart — there's no two ways about it," said Goggy Davidowitz, a professor in the departments of entomology and ecology and evolutionary biology at the University of Arizona.

True, if insects vanished, that would mean no pesky mosquito bites or fleas on Fido. Far more significantly, the scourge of insect-spread diseases, like malaria and dengue fever, that infect millions and kill hundreds of thousands of people a year would be over. [20 Startling Facts About Insects]

Farmers would also no longer need to use insecticides — more than 500 million pounds of the chemicals are used annually just in the United States — to protect crops from hungry pest insects, according to the United States Department of Agriculture.

Yet these gains for humankind would be sort of pointless, seeing as most of us would starve to death.

For starters, approximately 80 percent of all of the world's plant life are angiosperms, or flowering plants. In order to reproduce, these plants must have pollen physically transferred from a male anther to the female stigma within a flower.

In rare instances, wind, water or animals such as birds and bats do the trick. But the vast majority of the pollinating work is done by insects, including bees, beetles, flies and butterflies. "Without pollinators," Davidowitz said, "most plants on the planet will disappear."

The world would not just be a less leafy place in this insect-apocalypse scenario. Between 50 and 90 percent of the human diet by both volume and calories, depending on the country, comes directly from flowering plants.

Angiosperms include staple grains like rice and wheat, as well as fruits and vegetables. In addition, flowering plants indirectly put food in our bellies by making up the diets of the animals we eat, from cows to chickens and even most freshwater fish.

"Most of our food is insect-dependent," said Davidowitz. "If insects disappear, a lot of mammals and birds disappear, too, because if you don't have insects pollinating, even those animals that don't eat insects won't have fruit and foliage to eat. It does have a domino effect." [In Photos: The World's Most Efficient Pollinators]

Upping the ante on the End of Days-style event that insect eradication would represent: Ghoulishly, all the resulting dead trees and animal carcasses — and human bodies — would linger around far longer, decomposing much slower than they would in a world abuzz with insects.

That's because insects, along with bacteria and fungi, serve as major decomposers of organic material, from leaf litter to corpses. Without insects, the world would heap up with dead stuff.

Adding a poetic touch to the decrepitude, honey and silk — two of the most highly prized substances in human history, celebrated in ancient verse and across centuries of trade — would be no more, since both are products of insects.

Alarmingly, the notion of all insectkind croaking is not utterly inconceivable. To take one prime example, the triple whammy of pesticide exposure, disease and habitat loss has decimated wild and commercially hived honeybees in recent years.

Furthermore, global climate change is throwing off the delicate synchronicity of insect hatchings and flower blooms in the spring. Missing each other by critical weeks, flowers that bloom too soon or too late go unfertilized, while their dedicated pollinators go hungry. For instance, research published in 2014 in the journal Current Biology revealed the spider orchid and its pollinator, the miner bee, have become out of sync with climate change causing the bee to emerge too early in the flower's cycle.

Overall, times are tough for many insects out there, giving us a taste of what life would be like in their absence. "This is not an abstract thought process," Davidowitz said. "This is happening now."