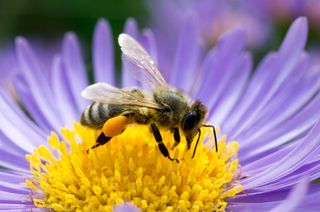 Humans aren't the only ones who find city life uniquely stressful — bees feel the stress, too, scientists have found.

Honeybees living in urban areas encounter more deadly pathogens than their counterparts living in the burbs or the country.

Over the past century, pollinator numbers have declined dramatically in the United States and in Europe. For bees, the fungal parasite Nosema cerana and the aptly named parasitic mite Varroa destructor are chief culprits, along with the viruses that the V. destructor mite carries or activates. [See Photos of Honeybee Scouts Finding Food]

But do these threats vary across habitats, affecting city bees differently than their country cousins? Steve Frank, an associate professor of entomology at North Carolina State University and co-author of the study, questioned whether factors in urban environments could increase the pathogens bees are exposed to, and affect how bees' immune systems might respond.

The city bees do encounter much higher doses of disease agents — not just more types of pathogen species, but more of them overall — than bees living in rural or suburban areas, they found.

Bee population density is partly responsible. Like urban humans, city bees frequently find themselves competing for limited resources. "Bee colonies have fewer feeding sites to choose from in urban areas," study researcher David Tarpy, an entomology professor at North Carolina State, said in a statement. With a limited number of pollen-rich destinations to share, colonies of city bees get up close and personal with each other — and share plenty of microbial hitchhikers in the process.

Tarpy also suggests that urban environments could simply be more hospitable for breeding pathogens. Cities retain more heat than less developed habitats, helping microbes to thrive and multiply, and thereby intensifying their impact on bee hosts. Other wild pollinators that bump up against bees could also contribute to the microbial mix, exposing bees to even more species of pathogens.

Unfortunately, city bees living in colonies managed by beekeepers face a situation that's  direr than that of feral bees. The study researchers found that if pathogens attacked bees kept by people, the bees' immune responses weren't as strong as those in feral bees, and their survival rates declined. When feral bees' immune systems were challenged, the response measured was "nearly twice the levels of managed bees,"  Frank said. In urban settings where the pathogen load is significantly higher, a more powerful immune response gives feral bees a distinct advantage over bee colonies that depend on a keeper.

A number of factors that could explain the weaker performance of kept bees' immune systems, Frank said. Managed bees typically live in much larger colonies; more individuals in a hive means more stress, and can also mean more opportunities to spread viruses and parasites. And the pesticides that beekeepers use to protect their bees from mites and other pests can have the unfortunate side effect of reducing the bees' ability to defend themselves against pathogen attacks.

As bee populations continue to decline and threats continue to rise, this study marks an important first step toward unraveling the mechanisms that protect bees from parasites and disease.

"This work is really only a starting point," Tarpy said. "The next step is to begin work on understanding why it is happening."

The study is detailed online in the Nov. 4 issue of the open-access journal PLOS ONE.