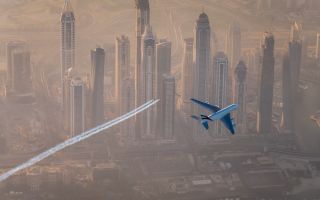 Move over, George Jetson — a new rocket-propelled duo is giving you a run for your money!

Unforgettable new footage has been released showing two men wearing jetpacks as they zoom above and below the world's largest commercial jetliner.

The beginning of the new video looks like a typical commercial of a jumbo jet flying over Dubai, but then two men strapped with jetpacks come in from above and begin flying in formation alongside the Airbus A380 jetliner.

The video, released by the Emirates airline and Jetman Dubai, features adrenaline junkies Yves Rossy and Vince Reffet. The two men have donned jetpacks in similar demonstrations in the past. For instance, in 2012, Rossy flew alongside a B-17 bomber, and in 2013, he flew over Mount Fuji. Earlier this year, the team flew over Dubai. [In Images: Daredevils Zoom Past a Jumbojet]

To capture the jaw-dropping video, the A380 jetliner flew in two holding patterns about 4,000 feet (1,200 meters) above the skyscrapers of Dubai. The two daredevils were deployed from a helicopter hovering at 5,500 feet (1,700 m), while a film crew flew in a helicopter about 1,000 feet (300 m) above the jetliner, according to the Jetman website.

Though the jetpacks do include rockets, they're more like wearable plane wings, with a carbon-fiber-based jet wing propelled by four turbine engines that produce about 88 lbs. (40 kilograms) of thrust. The jetpacks are capable of flying at a cheek-jiggling 195 mph (314 km/h).

Though jetpacks have graced the pages of sci-fi stories for a century, the futuristic travel option may soon become reality. Several companies have demonstrated jetpacks at trade shows in recent years. And in 2014, a jetpack-clad man rocketed around inside the atrium of the Ronald Reagan International Trade Center in Washington, D.C. Another company, Martin Aircraft Co., says it will release a fan-propelled, personal flying machine sometime next year. And today (Nov. 5), another man demonstrated a jetpack as he soared by the Statue of Liberty.