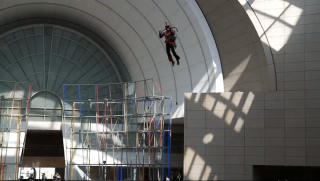 A pilot flew a jetpack for 20 seconds in the atrium of the Ronald Reagan Building and International Trade Center on May 17, 2014, at the "Future is Here" festival in Washington, D.C.
(Image: © Tanya Lewis/Live Science)

WASHINGTON — Those of you pondering the future and wondering where your jetpack is, take heart: A human pilot flew a real jetpack for 20 glorious seconds in front of a packed crowd here Saturday (May 17) at the "Future is Here" festival, hosted by Smithsonian Magazine.

The pilot flew around inside the cavernous atrium of the Ronald Reagan Building and International Trade Center. The jetpack can fly for a maximum of 26 seconds before it runs out of juice, according to Jet PI, which built the futuristic flying device. The demonstration was the jetpack's first indoor flight in the United States, apart from the company's warehouse.

The jetpack is fueled by hydrogen peroxide and nitrogen gas, which react in the presence of a silver catalyst to produce jets of compressed steam that provide the necessary thrust, company officials said. The pilot uses a handle on one hand to control the pack’s flight dynamics — including roll, pitch and yaw — and uses the other handle to control the power.

The past, present and future of jetpacks will be featured in an upcoming Smithsonian channel documentary.

The Future is Here festival is a two-day event celebrating outer space, science fiction and the technologies of tomorrow. The conference features talks on everything from robots to human evolution to life beyond Earth.