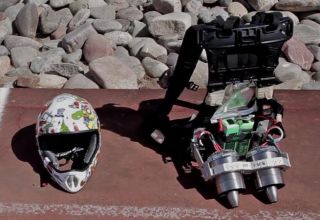 Researchers hope this jetpack will one day get runners moving at a 4-minute mile pace.
(Image: © Jason Kerestes/Arizona State University)

The newest jetpack won't help you realize your dreams of soaring across the sky, but it could help you run a mile in just four minutes.

The prototype jetpack, which is still undergoing testing and development, is lightweight, battery-powered and worn much like a backpack. The futuristic-looking device has so far enabled one wearer to shave about 20 seconds off his time when running a mile around an outdoor track, according to Jason Kerestes, a graduate student of engineering and robotics at Arizona State University who leads the jetpack project.

Without the jetpack, the speedy test subject ran a mile in 5 minutes and 20 seconds. But when wearing the device, the same runner clocked in at 5 minutes and 2 seconds, and he was able to maintain a lower heart rate while running, Kerestes told Live Science. [Bionic Humans: Top 10 Technologies]

The jetpack, which has been dubbed the "4 Minute Mile" (4MM) project, was originally developed for the military's Defense Advanced Research Project Agency (DARPA) as part of a program to get soldiers moving more quickly on the battlefield. The technology has a ways to go before it realizes its four-minute mile goals, but they are still within reach, Kerestes said.

To get the jetpack up to speed, the researchers are taking a closer look at the physics behind the device. Like most jetpacks, the one developed by Kerestes and his team operates by generating thrust, or a propulsive force that moves the person wearing the device forward at a faster pace. In order for the jetpack to have any effect, it must create enough thrust to make up for its own weight, Kerestes said.

"When the jetpack is on your back, it's creating about 15 lbs. [6.8 kilograms] of thrust, which is essentially like somebody pushing you from behind with about 15 lbs. of force," Kerestes said.

But the key to making the jetpack even more efficient doesn't necessarily lie in increasing the amount of thrust it produces, said Kerestes, who explained that there's a "sweet spot" for the right amount of thrust.

"Too little doesn't help enough, and too much is actually hurtful because it doesn't make you run faster, it makes you fall over," Kerestes said. "There's a unique proportion to body weight and the amount of force that works best, and we found that to be about 10 to 15 percent of your body weight."

Rather than adding more thrust to their jetpack, the researchers are developing a new system of propulsion fans — the mechanism on the jet pack that actually propels the runner forward — that they said could get a runner's time down below the five-minute-mile mark. Unlike the static fans on the current jetpack, these new fans oscillate, moving in sync with the runner to apply the right amount of thrust, or force, at the right time.

"Whenever you're running at high speed, there's a very small fraction of time in which both feet are off the ground. We call it the flight phase of the gait cycle," Kerestes said. And it's during this phase that thrust is most effective at propelling a runner forward. But once the runner's feet touch the ground, the direction of thrust needs to be changed to ease this landing, he added.

"This is the future of where the jetpack is going," Kerestes said. "We feel that if we can enhance that technology, we can get somebody who can run a five-and-a-half-minute mile down to a four-minute mile."

The researchers are also developing prototypes using different materials, including carbon fiber, which they said they hope will decrease the weight of the jetpack by about 5 lbs. This lighter device will get runners moving even faster and will also allow the researchers to add more batteries to the device so that users can wear it for longer periods of time before it loses power, Kerestes said.

While the new jetpack was developed as a part of a DARPA program, the military agency decided to fund another technology that Kerestes and his team came up with, rather than financing the original jetpack idea. This means the Arizona State team is free to move ahead with the jetpack however they wish, including one day making the device commercially available to the public.

In fact, runners, and anyone else with a need for speed, might be able to purchase their very own jetpacks starting next year, Kerestes said. The device is now being considered for use in highly active sports, such as extreme skateboarding and skydiving, he said.