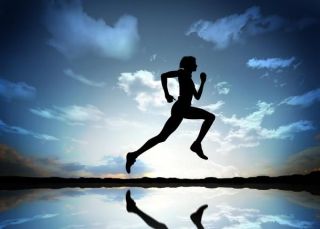 If you're a runner, it can be hard to see your own mistakes.

Unless you're constantly running alongside a full-length mirror to check out your reflection, it's impossible to notice that your posture is off. Maybe you have back pain, but you're not sure where it's coming from. Or maybe you're not getting the most out of your stride, but you're not sure how to properly adjust it.

That's where Gregory Holtzman comes in. Holtzman is an assistant professor of physical therapy and director of the newly opened running clinic at Washington University in St. Louis, and he diagnoses movement problems to improve runners' techniques and lessen their pain.

Patients who come to the clinic are first given a musculoskeletal evaluation so Holtzman and his colleagues can identify any problems with their muscle length, mobility or strength.

Then patients are videotaped from the front, sides and back while running on a treadmill so that the physical therapists can see any mechanical abnormalities up close and in slow motion.

"It's a very individualized sort of treatment because not everyone will respond to the same type of cues," Holtzman told MyHealthNewsDaily.

Holtzman shared with MyHealthNewsDaily the five most common issues his patients face (though the solution for each problem can differ from person to person).

To find the right remedy for you, he encourages scheduling an appointment at a nearby physical therapy or running clinic.

An asymmetrical running pattern — landing harder on one side of the body than the other — is one of the first things Holtzman takes note of when he observes a new patient. He evaluates this problem by listening to the way the patient runs.

"I think it's an overlooked component of running," Holtzman said. "You can get a lot out of the sound."

If a runner comes down harder on the right side than the left, or vice versa, it could signal an inherent mechanical flaw of the running style that can lead to pain , Holtzman said.

Another running problem Holtzman commonly observes are people whose knees collapse inward when they run, which is caused by weak gluteus muscles.

When you run, your knees are supposed to stay in line with your hips. But if your hip muscles are weak and aren't supporting your body weight, that weight will go to your knees and cause them to bow inward, he said.

"The knee bends and takes the shock," Holtzman said.

To resolve this problem, Holtzman recommends doing exercises to build up the posterior gluteus medius and the gluteus maximus, two of the key muscles in the buttocks.

3. Running on your fore-foot when you're really a rear-foot runner (and vice versa)

Rear-foot runners tend to have a higher amount of force exerted on their feet when they strike down compared with forefoot runners, he said.

"For rear-foot runners that are having problems, a lot of times you can make changes to the mechanics up and down the chain that alter the degree of that impact force," Holtzman said.

You do not necessarily have to change from a rear-foot strike pattern to a forefoot pattern, but a physical therapist can help to make subtle changes in mechanics to reduce pain, he said.

Forefoot running has gained popularity with the marketing of “barefoot” running shoes, but it takes time and training to run in this manner if you're a natural rear-foot runner, he said.

"The problem with forefoot running with some people is [that] their feet aren’t strong enough to support their weight," Holtzman said. "That's why if you're going to transition to forefoot or barefoot running, and you’ve been a rear-foot shoe runner, then you need to make that progression gradually so you can increase the strength of your foot."

Over-striding and swinging your arms unevenly are two of the main causes of back pain from running, Holtzman said.

"We tend to move in certain ways, or favor certain movements, that in the long term can contribute to stress on the back," he said. "Some people believe you alter your movements because of back pain, but our philosophy is that improper movement or postural alignment may increase the stress on the lower back and cause back pain."

Over-striding, which occurs when the steps you take are too big for your body size, can spur excessive rotation because the pelvis and spine move toward one direction more than the other, Holtzman said.

Swinging one arm further back than the other can also contribute to the spine misalignment while running, he added.

5. Being unaware of your foot type

Not everyone is blessed with perfect arches — and those who are more flat-footed than they realize could be suffering for it.

"People might recognize the fact that they don’t have great arches, but they might be wearing shoes that aren’t appropriate for their foot type," Holtzman said.

But wearing the wrong shoes can lead to hip, back and knee pain, he said.

Holtzman said it's best to go to a custom orthotics or specialty running-shoe store to buy special shoes for flat feet.

Sneakers from the regular big-box stores don't have custom fits, so they may not be able to alleviate pain, he said.

Pass it on: Visit a running clinic or physical therapist to find a solution to some of the most common running mistakes, which can cause pain and make your work-out less efficient.