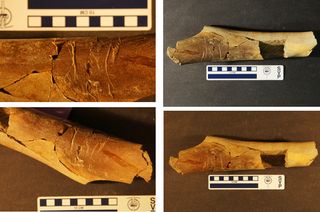 Sixty-six million years ago, a tyrannosaur may have sunk its sharp and serrated teeth into the bones of another tyrannosaur, new research suggests.

The gnawed bone may provide evidence that tyrannosaurs ate their own kind, the researchers said.

"We were out in Wyoming digging up dinosaurs in the Lance Formation," paleontologist Matthew McLain of Loma Linda University in California said in a statement. "Someone found a tyrannosaur bone that was broken at both ends. It was covered in grooves. They were very deep grooves." [Paleo-Art: Dinosaurs Come to Life in Stunning Illustrations]

The grooves looked like tooth marks, he said. It appeared that a large, toothy creature had bitten off the tyrannosaur's flesh, pulling it in the direction perpendicular to the bone — much like a person eats a piece of fried chicken. At least 10 separate grooves of varying widths — with the widest reaching 0.1 inches (5 millimeters) across — were etched into the dinosaur's long bone.

But one groove caught the researchers' attention. Located on the bone's wider end, the groove contains smaller parallel grooves that were likely created when the diner turned its head, dragging its serrated teeth across the bone.

Marks from the serrated teeth may help identify the culprit, the researchers said. Crocodiles have large teeth and bite forces, but their teeth aren't serrated. So the researchers crossed these fierce reptiles off the list. But theropods, mostly meat-eating dinosaurs that walked on two feet, did have sawlike teeth.

"These scores were likely made by a theropod dinosaur, and the width of the larger grooves suggests the traces were made by a tyrannosaur," the researchers wrote in their unpublished findings, presented at the Geological Society of America's 2015 annual meeting in Baltimore on Sunday (Nov. 1).

The only large theropods found in that Wyoming formation are tyrannosaurs — Tyrannosaurus rex and Nanotyrannus lancensis, they said. (Nanotyrannus is a controversial species. Some paleontologists maintain it's a relative of T. rex, and others say it's a T. rex juvenile.) But, based on the presence of the Tyrannosaurus and Nanotyrannus fossils in the area, it's possible that these species left the gnaw marks on the bone, indicating that tyrannosaurs were cannibals, McLain said.

"This has to be a tyrannosaur," McLain said. "There's just nothing else that has such big teeth."

However, it's an open question whether the offender killed or was just scavenging for a meal when it gnawed on the fallen tyrannosaur, the researchers said.

As they continue to study the masticated fossil, the researchers plan to invest more time analyzing the serration marks. Earlier studies on serrated Komodo dragon teeth show a relationship between serration size and the animal's size. Other studies have used this technique on tyrannosaurs, and McLain said it will likely work in this case, too.

"Exactly who did the eating that day, in the Late Cretaceous, could still be sorted out by the same grooves," he said. "It only works if you know what species it is. And since Tyrannosauruses are the only large predators in these formations, it's pretty straightforward."

But that might be jumping to conclusions, said Thomas Carr, an associate professor of biology at Carthage College in Wisconsin and a vertebrate paleontologist, who was not involved in the study.

It's not clear from the unpublished findings, thus far, if the bone belongs to T. rex, or simply another theropod, Carr said. (Theropods, like birds, have hollow bones, but more direct evidence is needed to identify it as a T. rex, he said.)

Moreover, it's not uncommon to find tooth marks scarring tyrannosaur bones, Carr said. But most researchers don't document the events, largely because the marks don't teach researchers much about the biology of the organism, he said. Some work has examined multiple tooth-marked bones to see whether there are any common patterns — and thus, a common strategy — that tyrannosaurs used for dismembering a carcass. Perhaps the new finding will contribute to this approach, Carr said.

"It shouldn't be a surprise to us that a top predator would eat anything available to it, since the environment is not banquet," Carr told Live Science. "But we know that this sort of behavior, cannibalism, may occur across the board for theropods, if not for most vertebrates."