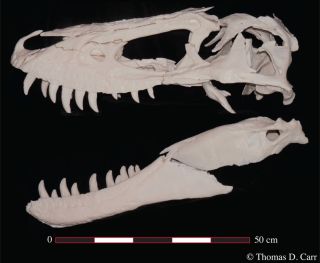 A 3D printout of the skull and jaws of Jane, a rare subadult T. rex that fills in the gap between small juveniles and larger subadults. The real skull is less complete than this 3D image, but researchers filled in the gaps with mirrored bones from opposite sides.
(Image: © Print produced by Steve Clawson, and assembled by S. Clawson and Thomas D. Carr.)

An adolescent Tyrannosaurus rex named Jane may settle a dispute more than 70 years in the making: Whether small carnivorous dinosaurs are younger versions of T. rex, or another species altogether, a new study finds.

The authors of the new study contend that small and slender Jane is a young, 11-year-old T. rex. In fact, as the most complete adolescent T. rex unearthed to date, her detailed anatomy is helping researchers understand the different life stages of these top carnivores, which lived during the Cretaceous period, more than 66 million years ago, researchers report in a new, unpublished study presented at the 75th annual Society of Vertebrate Paleontology conference in Dallas on Friday, Oct. 16.

Before Jane, there was a critical gap between juvenile and adult T. rex dinosaur specimens, and it was unclear how their body structures changed over time, said study lead researcher Thomas Carr, an associate professor of biology at Carthage College in Wisconsin. [Gory Guts: Photos of a T. Rex Autopsy]

"Jane is simply the best preserved and most complete example of a publicly accessible, subadult Tyrannosaurus rex in the world," study co-author Scott Williams, director of science and exhibits at the Burpee Museum of Natural History in Illinois, said in a statement. "The quality of the specimen and its availability will undoubtedly provide researchers decades of important data regarding the ontogeny [aging process] of the most recognized dinosaur species in the world."

A paleontology field crew from the Burpee Museum discovered Jane in Ekalaka, Montana, in 2001. They noticed her bones poking out of the rock of the Hell Creek Formation, and quickly got to work excavating the remains of the half-grown, 20-foot-long (6 meters) T. rex.

However, Jane isn't the first "little" T. rex specimen on record. In 1942, scientists found a small and lightly built tyrannosaur skull near Ekalaka. The finding sparked a debate about how much T. rex changed as it grew from infancy to adulthood. The skull sat for about 50 years on display in the Cleveland Museum of Natural History, but triggered another controversy in 1988, when famed paleontologist Robert Bakker analyzed it and announced that it wasn't a T. rex, but a newfound species.

Bakker called the new species Nanotyrannus lancensis and proposed that it was a smaller and sleeker cousin of T. rex.

In 1999, Carr suggested that Nanotyrannus wasn't a separate species, but in fact a juvenile T. rex. Many paleontologists were doubtful of this hypothesis, unsure that a dinosaur could change so drastically as it grew older, the researchers on the new study said.

"The extreme changes from the sleek skull of juveniles to the robust skull of adults were too much for some people to believe," Carr said. "For example, they didn't like to hear that T. rex lost tooth positions as it grew from a juvenile with many teeth, to an adult with fewer teeth. Regardless, the search was on for a transitional specimen that could test the hypothesis."

Jane may help clear up that confusion. Her slender skull and skeleton are intermediate in size and shape between the Cleveland skull and other adult T. rex skulls.

"Jane shows us that the gap is, in fact, bridgeable because many features seen in her are more similar to adult T. rex than to the Cleveland skull," Carr said. "The features are exactly what we'd predict are necessary to make the change to a full adult." [Avian Ancestors: Dinosaurs That Learned to Fly]

But Bakker isn't budging, and maintains that Nanotyrranus is a separate species, according to the journal Science. (Bakker contends that Carr hasn't properly studied the Nanotyrranus fossil, but few people have since its owners tried to unsuccessfully auction it for millions of dollars, leading many paleontologists to refrain from studying it until it is donated or acquired by a museum, Science said.)

Regardless, Jane is only one piece of the developmental puzzle. The researchers of the new study are still hoping to find other fossils that will fill in the gap between the adolescent skulls and the robust, imposing features of adult T. rex skulls, they said.

Once the researchers are done studying Jane, her skull will go on display at a public museum. Usually, museums pay hefty price tags to acquire new fossils, but one lucky museum will get her for free because paleontologists discovered her on public land.

"Dinosaur fossils such as this emphasize the importance of accredited institutions collecting on public lands, which makes the specimens on them available for scientific study," Carr said.